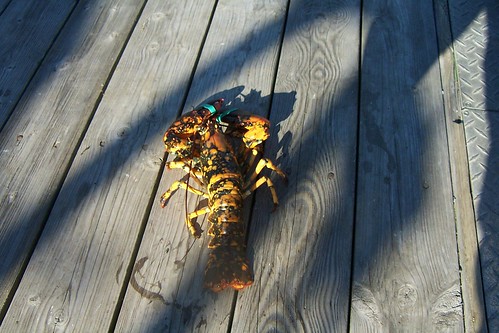 In all the close-to-60 years that husband has been lobstering, he has never caught a lobster that looked like the one above.

I call him/her “Polka Dot.” I never checked his/her sex, actually. But that’s neither here nor there.

“Polka Dot” or “Pokey” as he/she has become affectionately known to us, was just minding it’s own business in the bottom of the Atlantic Ocean one day when it strayed into a lobster pot full of yummy smelling bait. After staying for lunch and then not being able to figure a way out, he/she was truly “caught.”

I think that in a lobster’s genes, there must be the inherent knowledge of what “caught” means. It usually means “curtains” for them, one way or another.

So Pokey was there in the trap, having been caught, just waiting for the lobsterman from above to come along and haul up the trap, to take out any legal sized lobsters in that trap, and to plop them into his holding tank of water.

I imagine all that happening to a lobster would definitely seal it for him/her – there is no hope of escape now.

Pokey was so beautifully decorated that the lobsterman (Paul) just couldn’t sell him/her to any old lobster customer. So he kept him/her in a special holding crate for a while, planning to take my camera down to the harbor and get a picture of him/her.

Which he kept forgetting to do.

So Pokey languished in a crate in the harbor for days on end, and even though I nagged and nagged Paul about Poor Pokey, all alone with nothing to eat, etc., it continued.

Finally one day I put my camera on the counter in the kitchen, and when Paul was going to the harbor to check things out (we are having “winter” weather here now so he doesn’t get out fishing as often), he brought the camera and managed to take one picture of Pokey down at The Landing float.

When he came home, I was amazed that he’d only taken the one picture, so he said he would go back and bring him/her home and get some more photos here inside the house.

That all happened two days ago, and we got a bunch of more photos of Pokey, on the mat in our kitchen sink which you can see above. The poor little thing. I was really starting to feel for him/her by this point.

Finally, after the photo-shoot was done, and it was reconciliation time for Pokey, Paul said he was taking him back to the harbor and was going to release him!

That was the best Christmas present ever – for me AND for Pokey!

You’ve got your second chance, not something many “caught” lobsters ever get.

3 Responses to A Lobster’s Tale