Life on the Bounding Main, or My Old Man and the Sea

The other day, while Paul was selling lobsters down near the harbor in Marblehead… 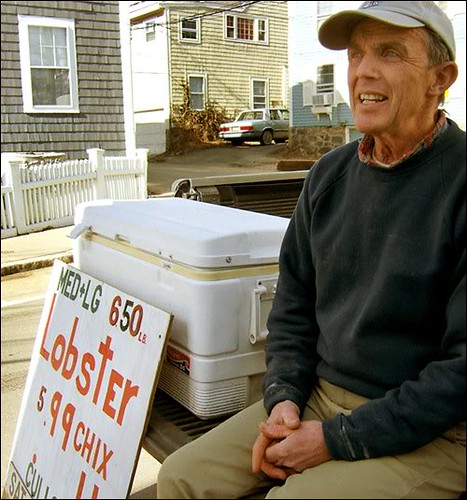 …he was talking with a customer who lives right on the water in Town and who very often can see Paul lobstering in his boat from his home. He told Paul that he loves to take photographs and often zooms in and takes photos of Paul while fishing, and that he has them all on a “web site” online. He told Paul that we could have any of those photo files if we want them, so I got them and offer them here.

I don’t go fishing with Paul any more, but it’s nice to have these as a reference as to what it is really like for him, day in and day out, on the ocean, doing his “thing.”

A PHOTOGRAPHIC ESSAY OF A LOBSTERMAN AT WORK

In the photo below, Paul’s is the smaller boat in the foreground. His friend is in the other lobster boat. I love this shot. It would make a great enlargement. 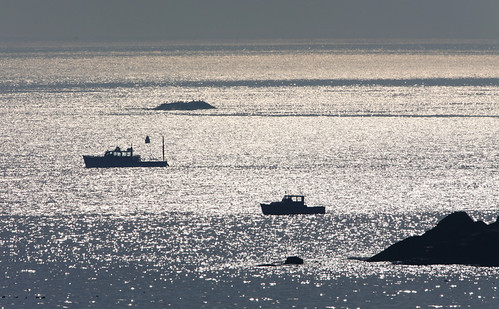 He looks so little compared to the great big wide ocean! 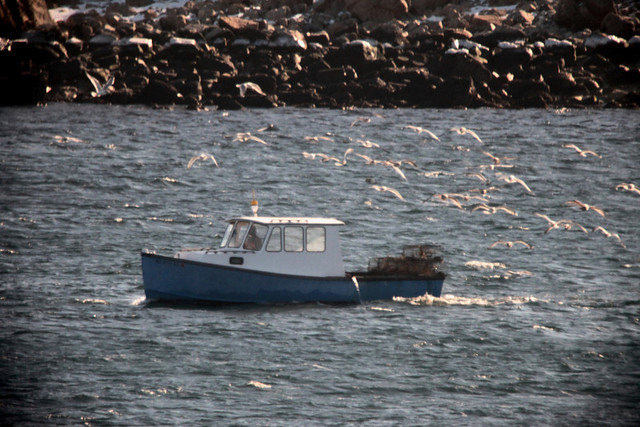 See what I mean about the seagulls having a love affair with Paul and his boat? 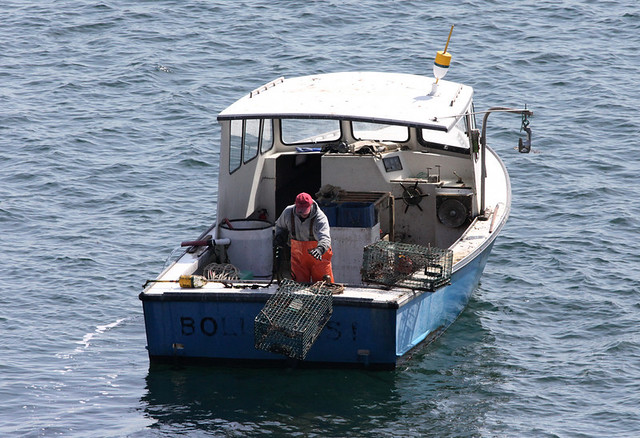 Hard at work. Nice action shot as Paul “sets” a trap somewhere new hoping that it will bring in more “bugs.” 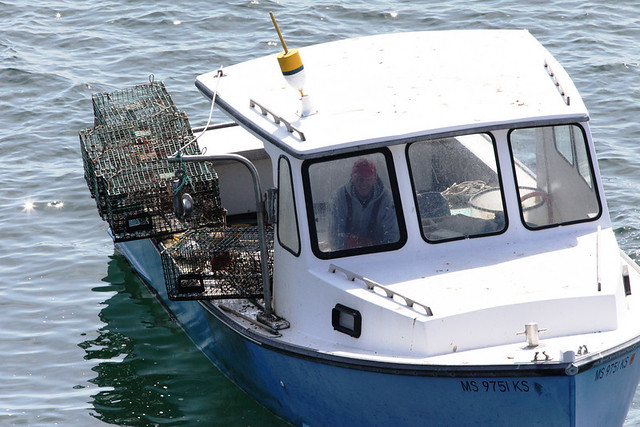 I would always be worried those traps would fall overboard while perched on the side like that. He’s probably moving them to another spot in the ocean. 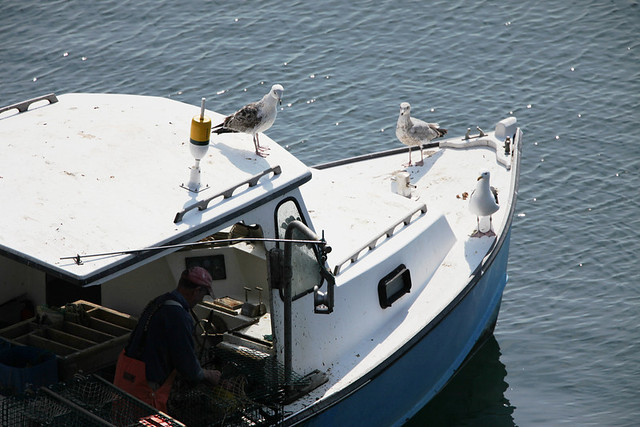 This is one of my favourite shots. I love the comraderie between the lobsterman and the gulls. Co-existing in nature, each trying to eek out a living. 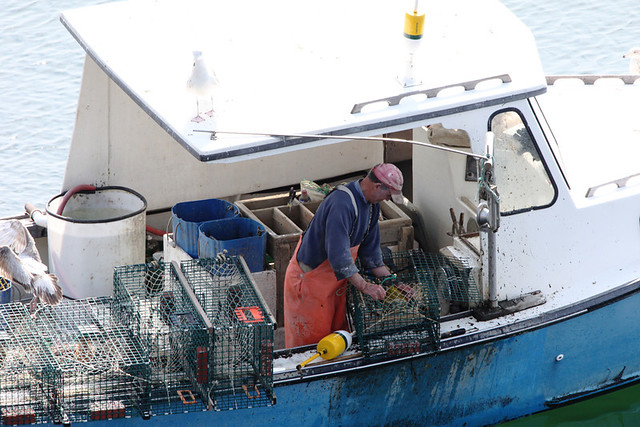 Reaching into the trap to see if there are any “keepers.” More often than not, they are too small to keep and back into the deep blue ocean they go, to be caught another day. 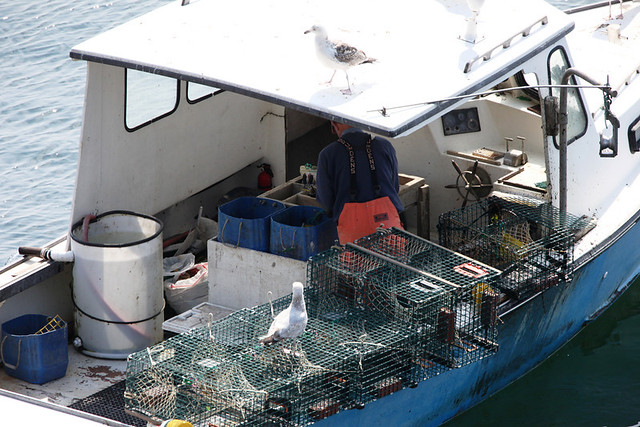 Here he looks to be “banding” the lobster, putting colored elastic bands around their claws so they can’t hurt him when he is handling them and also so they can’t injure the other lobsters while in the same crate. 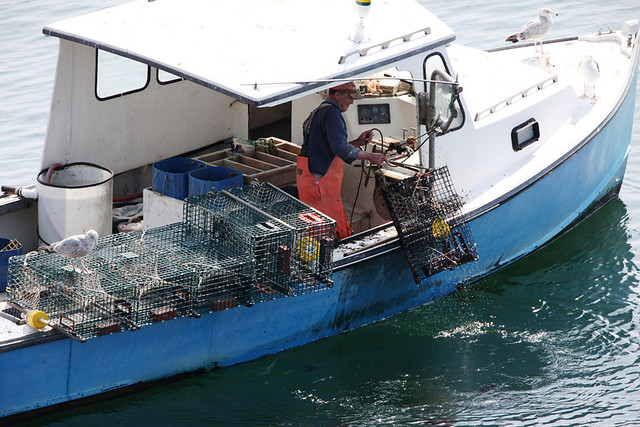 And up comes another trap from the ocean. 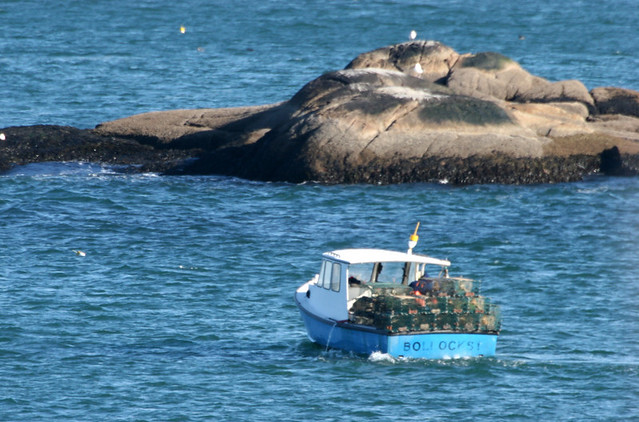 Off he goes with a boatful of traps, probably to be moved to a different location where they might “fish better” than the last place. 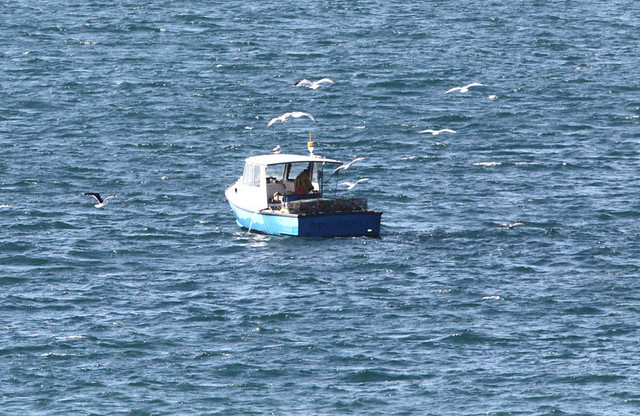 He never is really alone out there, is he? He’s always got someone or something to talk to – and from what he tells me, very often those birds get his ire up, stealing his bait, dive-bombing the boat quite often, and he has a few choice words to say to them out there. He even recognizes certain birds by various oddities about their bodies. I guess they are comrades on the sea. 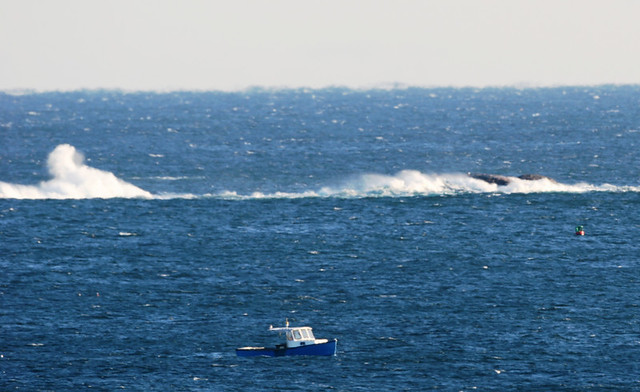 Can’t you just feel the quietude of his work days? 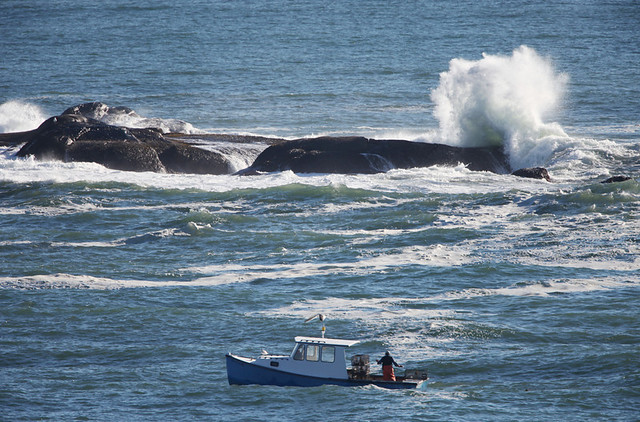 Now this is scary. When I first saw this picture, I said “Paul! What are you doing out there in that rough sea?” He told me that was nothing… it’s often like that. I’m glad I never realized it all these years or I would have worried a lot more than I have. He looks so vulnerable there, almost buried by the waves!

Granted, these photos seem to have been taken on nice days. There are so many days when he goes out when the weather is just awful. He fishes in the rain a lot, as long as the wind isn’t too high. He fishes in snow a lot, too. But I guess the photographer liked the nice sunny days best to photograph my Paul in his work.

This photographer, by the way, is Ken Taylor and his web site with his other photos can be found here. He has quite a few. Click on a subject matter and enjoy.

Thanks, Ken, for letting me use these. They mean a lot to me as the wife of a hard-working lobsterman who is out on the sea for most of his days.

Note: All photos on this page were taken by Ken Taylor and it is by his kind permission that I use them here. Thanks again, Ken!

11 Responses to Life on the Bounding Main, or My Old Man and the Sea