Everything is harder for me these days. Every tiny little project is a big deal now. Moving from point A to point B is slow and painful. Ok. So I decided I didn’t like our dining room like it was any longer. I wished for a “reading room” and that seemed like the perfect room for it. We do not “entertain” anymore (way too many trips from point A to point B for me!) so why waste a good space?

Here is the dining room as it was a few weeks ago:

You can see it’s crowded in there. I had plans to remove the buffet and put it in the living room and move the large bookcase to its spot in the dining room along that wall. But that isn’t going to happen. I’ve always despised the non-working fireplace at the end of this room, so I came up with this idea: 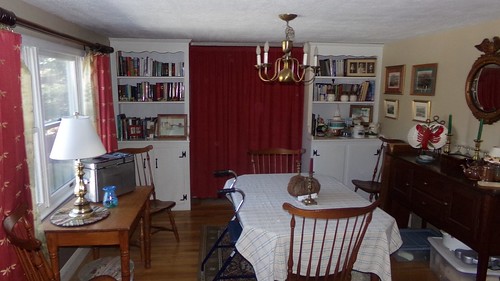 I had two dark red corduroy curtains and I put them on two tension rods – top and bottom – and covered right over that wall with the fireplace. I was going to ask Paul to board up that wall but this was so much easier!

Then I tried moving the table (which I was originally going to get rid of completely) over to the nook where the fireplace was: 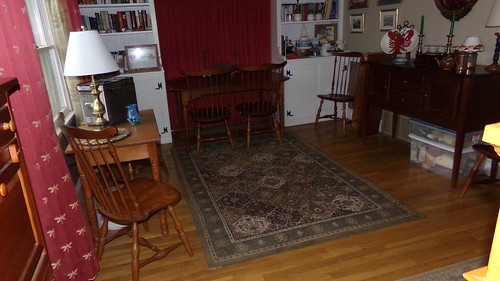 I lived with that for a few days but nah, it didn’t work for me. So I moved the buffet over to the nook, and put the table against that long interior wall like so: 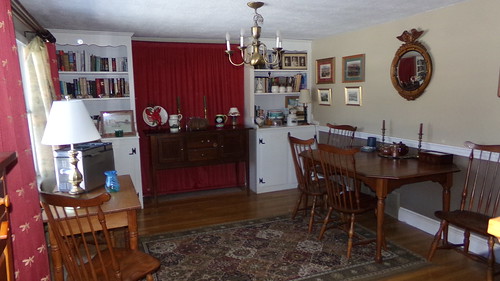 Then I took all the pictures/mirror/etc off the walls: 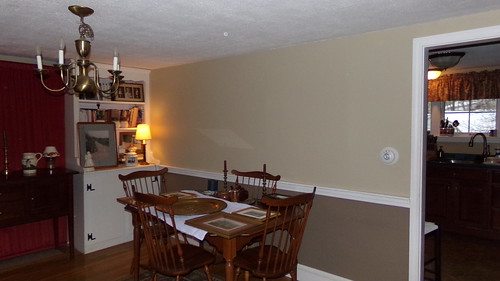 I had Paul fill in the holes and repaint where he filled in the holes. I moved that mirror, which I found at a junk sale many decades ago for about $25, over to the entry area, like so: 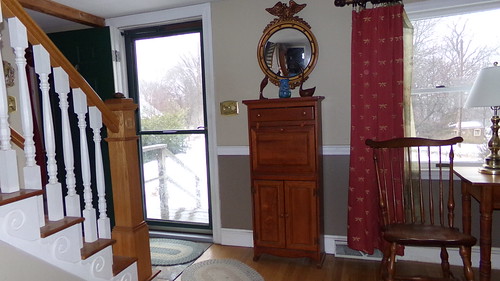 Then I rearranged the pictures I wanted on that long empty wall and hung them up: 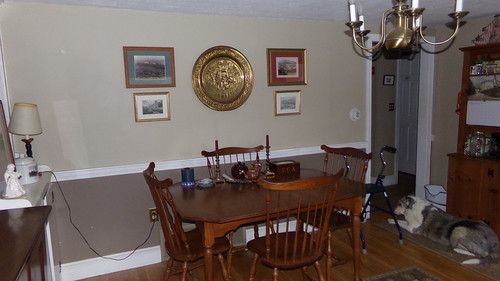 I toyed with the idea of putting up a long bookshelf along the top of that wall, and using my “paint” program, I made this photo: 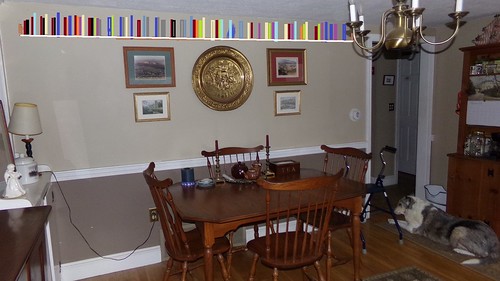 I still haven’t decided on that idea yet. Maybe down the road… but not now. I would love to have crown molding all around the top of this room, but Paul hates to do that so I’m leaving well enough alone for now.

All the while, my trusty assistants were giving me good sound advice on what to put where…

And here is how things stand now: 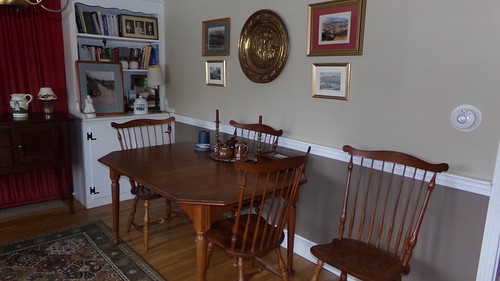 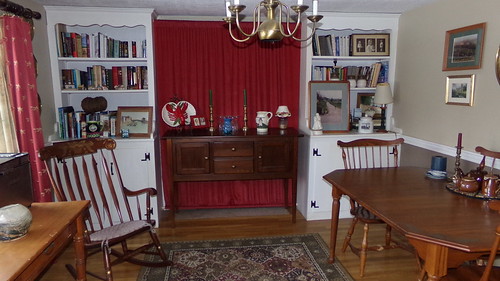 You can see that the chandelier has to go. I plan to put a flush-mount light up there on the ceiling… so no one bumps into it walking around this room now.

My plan is to get one or two comfy reading chairs to put on the left side of the room, on either side of that little antique table in front of the window, one for Paul and one for me, so we can just hang out in there with our books, quietly, without any TV or radio going on, looking out the window at the trees and birds and dogs… nice and peaceful-like. 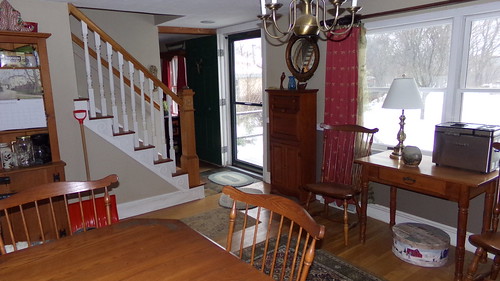 So that’s that. I have looked and looked online for some small sized cozy reading chairs. There is not a whole lot of room for anything more than a small size there, but I just know the right ones are out there somewhere, and I will find them.

(Update: The finished room can be seen on this page a little while later.)

Time to get up and do a couple of things here.

14 Responses to Room for Renewal