The Day After… How It All Went Down

My birthday bash – it came, we ate, it’s over. Here’s how things went down: 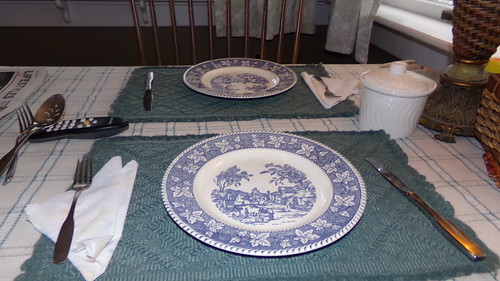 Got the table all set for Paul’s arrival back home with the food. Clams! Scallops! Shrimp! Dube’s famous Onion Rings!

Here he comes and oh my, I’ve waited a year for this, he’s serving some up: 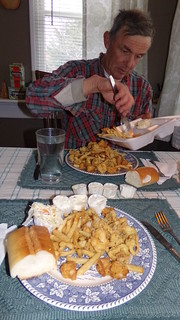 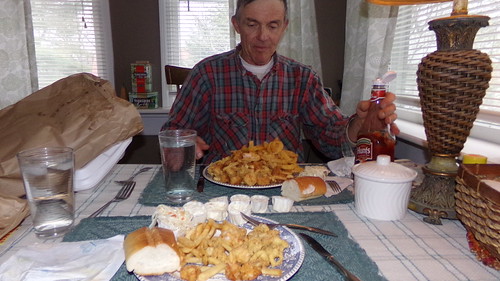 Will you look at all that tartar sauce? I asked for extra, and Paul doesn’t like it, he uses ketchup! (men!) but not me, I like tartar sauce on my fried seafoods! 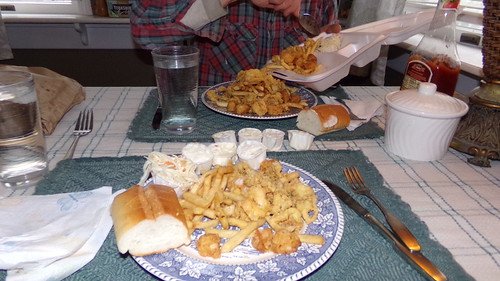 Notice he has more than I have. I saved a lot of mine. For leftover lunches… or whatever. It’s in the fridge now, quietly waiting for me…

(Neither of us ate the bread – it came with the dinner but it’s not really our thing).

And then finally, dessert: 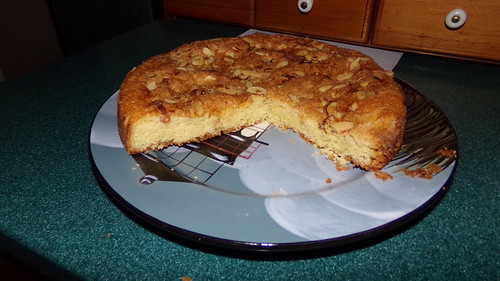 This is the amazing cake I made yesterday afternoon. Found the recipe in Joy of Cooking cookbook. 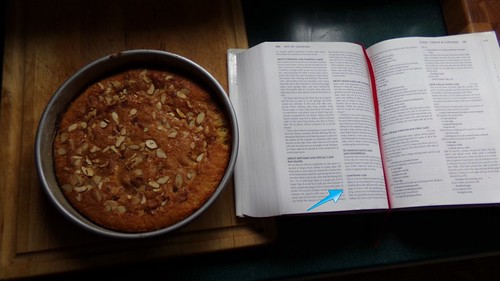 I can’t say enough about this “Lightning Cake” – it is just too yummy for words really. Take my word for it. If you have this recipe book, go make this cake. For something special, or just for YOU – because YOU are special every day!

So, we gorged out on the above feast. It was just divine.

Before we knew it, it was over, leftovers were put away, dishes were washed up, dogs were let out/in, and we retired to the TV room to watch a new DVD I’d gotten yesterday in the mail called “Shetland” – it’s a series of murder mysteries taking place in the Shetland Islands of Scotland.

The perfect ending to a perfect birthday. But when I went to sit down in my chair, there was a large bag in it where I should be, and that bag contained this: 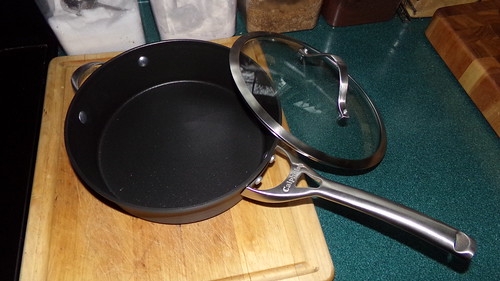 My present from Paul – just what I’d asked for a few months ago… a Calphalon deep sided braising skillet. I cut out a picture of it when it was on sale a while ago, and he put that little picture in his wallet. He found it for the same sale price at Home Goods just up the street from here so kudos to Paul – a shopping job well done!

(And for Nina – no I didn’t get a card, but that’s probably because I read him your entry about Ed and Whole Foods and the card, etc. and we had a good chuckle over it, and I told Paul I do not want a card… just a waste of his hard-earned dollars – so he and I agreed… no card. Just a present (which I wasn’t really expecting, but now I’m thrilled to have it).

We were even able to manage a tiny slice of the cake after supper, well into our mystery movie… the reason it looks like there’s a lot gone is that I had a tiny piece in the afternoon, when it came out of the oven, just to make sure it was edible and that we would both like it. It was and we did!

So that’s over with. We can move on to our next big adventure which is the fact that in two days, Em has to go to dog-doctor’s and have surgery, a fatty tumor removed and her teeth cleaned. Under anesthesia.

Cheers for sweethearts who always seem to do just the right thing,

12 Responses to The Day After… How It All Went Down