Some News on Several Fronts…

Just look at that sky! 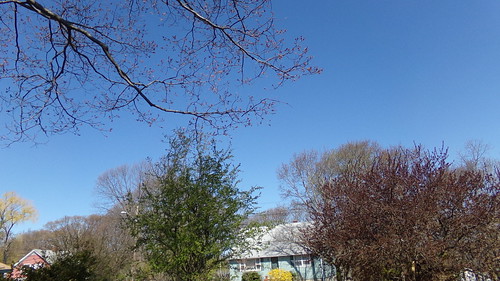 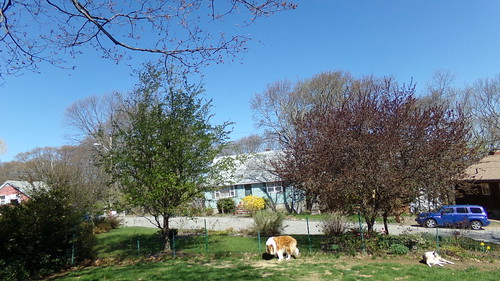 and see how Nathaniel (left) and Pal (right) are reaching out to touch each other this year? Making a natural arbor across the front garden? 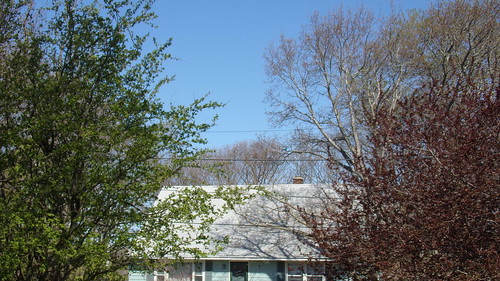 and you can see the handful of tulips just starting to bloom under the crabapple tree (aka “Pal”) there in the shade. 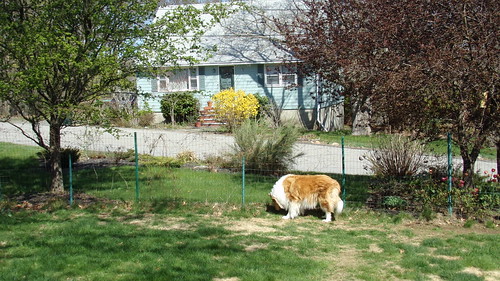 …but the real reason I went out there with camera in hand was to record the arrival of my first herb garden in many years… over there on the side deck… see the large shallow round pot filled up with herbs: 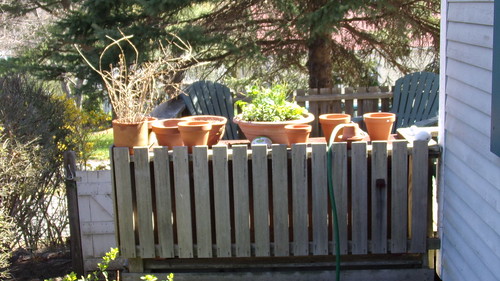 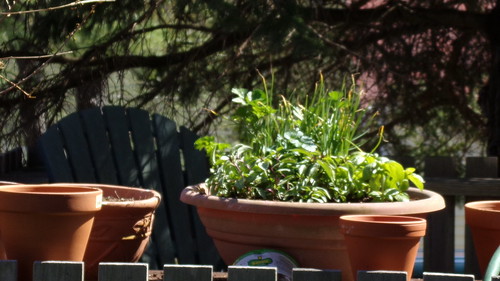 Love it! Paul was up at Home Depot the other day and he said if I write them all down on a piece of paper, he’d pick me up the herbs I wanted. The list included

What I got were two each of the chives, basil, “Thai” basil, and flat leaf parsley.

I guess he didn’t have his glasses with him and when he saw the “Thai Basil” he must have thought it was the “Thyme” I’d written down. Oh well… no matter.

I also want to get some tomato plants before too long, but it is still quite chilly here – although today has really warmed up a lot just since noon.

Then we have my little angel-face collie-dog enjoying life outside for the few minutes he gets out there: 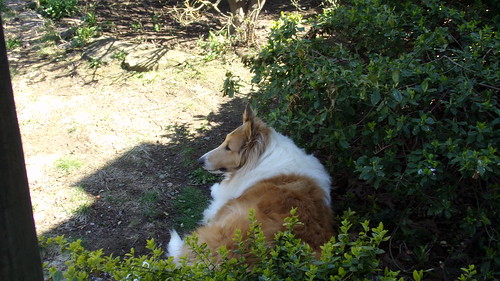 …and here’s some more color, not much but some… 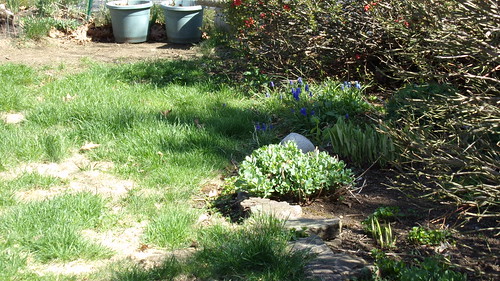 So, that’s our early spring tour around the garden…sort of. I love having the herbs out there now. We had homemade burgers on bulky rolls last night and I make a special sauce to go on the rolls and I covered the inside top roll with several of my new herb leaves and what a difference that made in the taste of that burger… yum.

Now I don’t want to ruin the mood here, since we are really enjoying this sunny weather after that horrible winter we endured… but I would be remiss if I didn’t tell you that we got the results of the path report on Em’s tumor. Dog-doc said that it was malignant. Not the word we were wanting to hear. He also reiterated that he is quite sure he got all of it, that the margins were quite clear, and the path report also said that the margins were quite clear of it. But still, with the diagnosis of “malignant tumor” comes the expected fear and anxiety of a dog who probably won’t live out her normal life measured in years. She is 11 now and I have no idea how many more years we will be graced with her presence. I hope a lot.

As for our plan of action, per dog-doctor’s recommendations, we are going to follow the wait-and-see plan. We are not getting into chemo and radiation for her. He recommended we don’t. He said if it were HIS dog (and he is a dog person himself) he would do it this way. It’s not just the money that it would cost us, which would be substantial, but it’s her age of 11 and what it would do to her quality of life left. She seems fine right now.

She goes in on Monday to have her staples removed. So far she’s only been seen licking her wound a few times but hasn’t done any damage to it so we’re confident it will heal. Now if that nastiness that was inside her is just gone with the removal of the tumor, we will be one happy family.

So let’s hear it for that little girl who lives on the Hill, Miss Emmalee the collie dog! Hip hip hooray! 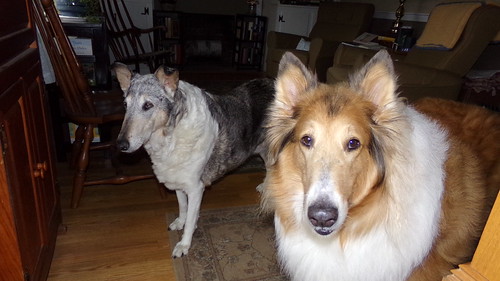 And a little cheer for her devoted brother Kip who won’t leave her side for more than a minute or two at a time! What a guy!

13 Responses to Some News on Several Fronts…