I must say, we thank you all for prayers and well-wishes for our Emmalee girl. 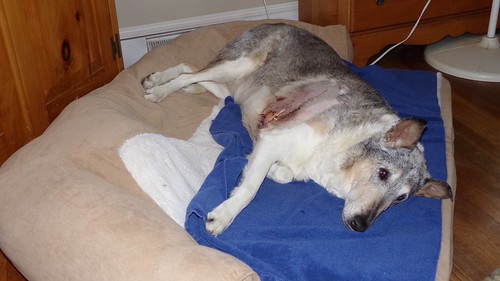 I was not sure I’d ever see her again yesterday when Paul took her off in the car to see dog-doctor. She was SO poorly acting that I really thought they would take one look at her and say it was “time.” I prepared Kip for it as best I could. I sat close to him and we had a long cuddle and a chat about things. He really is an amazing dog, y’know… he seems to know what I’m thinking most of the time. Except when I’m telling him to stop barking… he can’t quite figure out the meaning of my words during those times, but otherwise he’s very good.

So Em was gone all day yesterday. The doc called late morning to say they’d given her IV fluids and antibiotics… that she had quite a good (?) infection in there. They expressed/drained some pus from her wound area. She should be coming home later in the afternoon.

At around 4:30 Paul went down to get her. She seemed happier upon arrival home than she was when she left here, that’s for sure but still very hesitant to do anything. For some reason, since her operation, she seems to have lost most use of her rear end and legs… She never really had good strength in those back legs of hers, but now it is much worse. She really struggles to get up from a lying-down position now and is quite wobbly going up/down stairs.

She refused her usual food last night but I had made some boiled eggs to go with our salad for supper so I gave her pieces of mine, and she ate them all! At least it was something.

After a long night of sitting in the reading room with her sleeping on the floor, and monitoring the “drain” she has which leaks blood out of it on a regular basis, we finally all went up to bed around 9 o’clock.

This morning Paul said she would not eat anything at all. So I got up and we made her some scrambled hamburg… she turned her nose up at THAT! Very unusual for a dog to pass up beef. Then I thought of the eggs, so we scrambled up 3 eggs and served them up to her on a flat dish and she ate almost the whole dish! We gave doting brother Kip the rest as he was hovering over her the whole time, wondering why she gets all the good stuff and he gets the kibble!

I am going to cook up a batch of rice, and we cooked up the rest of the 1/2 lb. of hamburg for later… and I’ll make some more eggs for her… She needs to eat or she will never recover!

You can see below the drain they inserted to keep the fluids from building up inside her wound. Sorry this is so graphic. I guess we are used to seeing it now so it’s not so horrible, and the blood stains are just from dripping out of the drain. 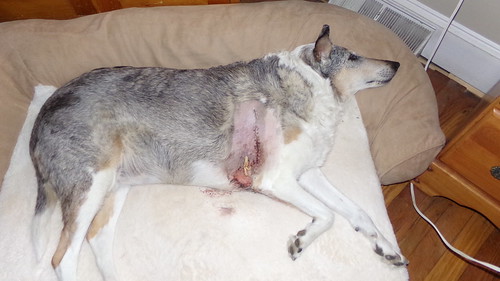 She goes back on Friday to have that removed… and I really hope she has done some good healing by then and feels better. She is snoozing right now over there in the corner on her bed.

Let me just say that I’d much rather be showing you photos of the flowers that are popping out around the garden right now. The viburnum bush out back bloomed yesterday in full and the aroma from that plant permeates the entire property. I was sitting out front on the porch and could smell it, and it’s all the way behind the house! I had all the windows open (we were in the 80’s) and the aroma was divine from that bush. I love my viburnums.

But our Emmalee is our flower of the day, so she is what we get here. 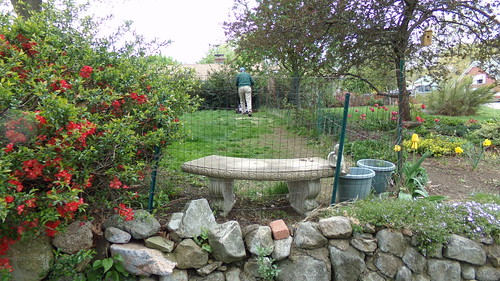 Below, the plum bush/tree, not sure which, but it was transplanted from the front garden years ago and is not growing very symmetrically because of the large evergreens around it… but it’s blooming right now which is nice. 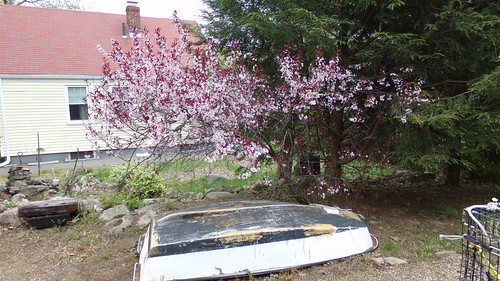 “I can never read all the books I want;

I can never be all the people I want and live all the lives I want.

I can never train myself in all the skills I want.

And why do I want?

I want to live and feel all the shades, tones and variations of mental and physical experience possible in life.

And I am horribly limited.