Here today…. (will be) gone tomorrow.

See those green bushes above, that go behind that blooming lilac bush? There are four or maybe six (I think) burning bushes that we put in years ago, they make an L-formation there. I never thought they’d grow like they have. Paul has had to prune them way back quite a few times and, to tell the truth, he’s not really a gardener by nature and he only does stuff out in the garden because it needs doing. He prunes things and doesn’t enjoy it.

So yesterday I made an executive decision – we are cutting those burning bushes down – today.

I told him to take his time, but he is just happy I’ve decided they can go so he said he will do them when he gets home from lobstering today. I am waiting now for that event… to be able to see out into the neighborhood from the front porch… at least to the right of the house.

Kip looks so small next to these bushes!

I made this decision yesterday early when I was sitting in my new chair on the front porch with the dogs. I couldn’t wait for Paul to come home to tell him. When he came home, he went right to work on taking out a tree I also asked him to take down, way out back on the lower level of the back garden. It was a tree that we did not plant but I figure the birds planted it by dropping the seeds there. It was not too bad for a few years but lately things have really taken off and it was so big it was shading the entire back garden area. My euonymous plants weren’t getting any sun! They seem stunted. So that tree is now gone but he hasn’t hauled away all the limbs/leaves yet.

Below you can see the tree that was taken down, one trunk about 20 feet high still remains (there were 3 trunks):

All that foliage beside and behind the trunk are the limbs and leaves still sitting there, cut down. Paul has to organize all that and get it ready for the waste removal men next week.

Before taking down that tree with the 3 trunks: 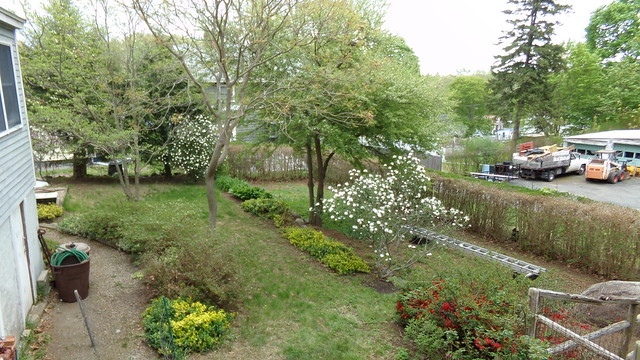 So, today the burning bushes will be history. If he cleans up his mess, I will take photos tomorrow, or whenever it’s presentable enough for photos.

It’ll be good for these plants, in front of the burning bushes, to see more sun for a change.

Change is a good thing.