For some reason, Sunday mornings always seem like a good time to peruse the Homes for Sale sections of the paper and internet. This is one passtime I love to do. I save houses I like and the realtors will email me with possible homes for sale nearby… I feel like I’ve been on a trip by the time I’m done looking. Of course, we are in no position to buy a house, or to sell our house, now. But I like to dream.

Just after we were married, we had planned on buying Paul’s folks’ house in Marblehead.

Above, the folks’ house now, looking a lot different from back then. 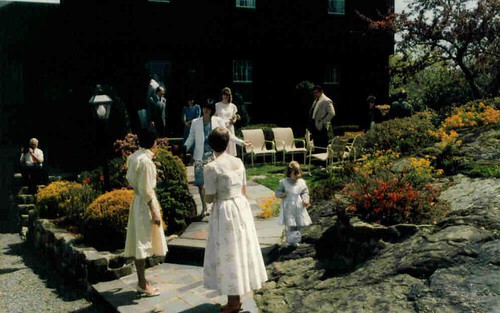 Above, not the best view but you can see the house on our Wedding Day in 1986 – we got married there.

They were going to sell it to us “cheap” for about $200,000 – the price cut would mean that Paul would have gotten his inheritance by not having to pay full market price. Well, we married in May and we moved right into the house. His folks had an air-stream trailer and were retired, so they motored all over the country in that thing and lived in Florida in it in the wintertime. We lived at their house in preparation for buying it from them.

We lived there for about 4 or 5 months. When they returned they pulled their airstream into the long driveway and plugged into the house for a while. One night they called us into the trailer to have a chat. The gist of the matter was that they had spoken with their accountant and he advised them NOT to sell the house at a reduced price and that they needed the full market value of the house to use for retirement purposes. So we had to look for a new home.

We were crushed. Paul loved that place as his father and grandfather had built it with their own hands.

So we started the house search right away.

We looked at many homes in Marblehead, which was where we planned to live since Paul lobsters out of Marblehead Harbor and it is our home-town. Every home we looked at had something Paul didn’t like. I loved ALL of them! It was a dream-come-true for me just to be married to Paul at that point but to be house-hunting, something I never thought I’d be doing in this lifetime, was an even bigger dream. So we schlepped around town at all the homes in our price range, which back then was around $200,000 — not too shabby in the 1980’s.

Then we found this house on Jersey Street.

Oh how I loved that house! It was only one street over from where I grew up, on Evans Road. It was only a few houses down the street from where my best friend, Carol, lived while I was growing up. I practically grew up in this neighborhood, we played all around here as kids. It was perfect, in my mind.

As you can see by looking at the current photos of this house (click on the photo above for the listing and photos of it), its been renovated but it was still great when we looked at it. We knew the yard was a little (a lot) small for us as we had lobster traps to store in the wintertime and we had two great Pyrenees dogs living with us!

But we made allowances and decided we’d make an offer on it. We both loved the place. A historic house, to boot!

The owners were moving to California and were “motivated” to sell, so our realtor told us. I can’t remember the exact figures all these years later, but we offered something like $180 to $185,000 for it. They were asking a little more than that, but they came down a bit and we went up a bit. We ended up $2,000 off… if Paul had agreed to go up another $2,000, we would be living there still to this day. But he was not budging and the owners would not budge. I was furious about this! $2,000? I could not convince Paul to go up. We lost the house.

Back to the drawing board. One day during my lunch hour, I saw a small personal ad for a house for sale in a neighborhood not far from where I worked, in Salem but near the end of Marblehead too.

It was what was to become Crow Cottage. The rest is history. 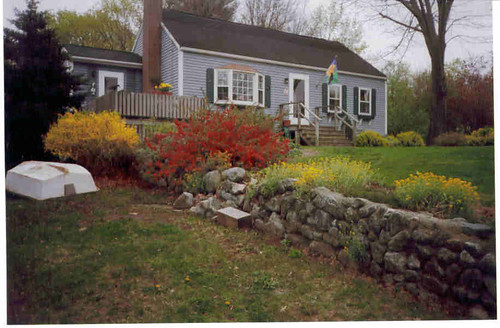 I showed it to Paul, he said he could make an offer on that house. It had a huge yard front and back, plenty of room for all his “stuff” and the dogs and us.

We closed on the house in November of 1986 and moved in at the end of January 1987. We’ve been here ever since. 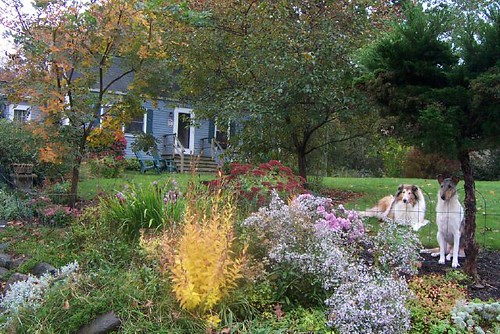 Today I was perusing the homes for sale in Marblehead and found that Jersey Street house for sale, for $649,900. Wow. We could have made a nice little profit if we’d bought that house! Not that it will sell for that price, but homes in Marblehead are very expensive these days so I bet it will. We paid $179,000 for this place with .25 acres of land with it. We’ve been quite happy living here, and the house is not too big for us (for me, anyway — to clean!). We probably made the best decision for our own personal happiness. The dogs have the front yard here, etc. I’ve had lots of fun planting things in the garden, front and back, as you all know by now. In fact, we’ve been cutting some things out lately, things that have just grown too much – like the forsythia bushes by the driveway – they came out this past week – note the space over by the little stone wall there behind the corner garden… 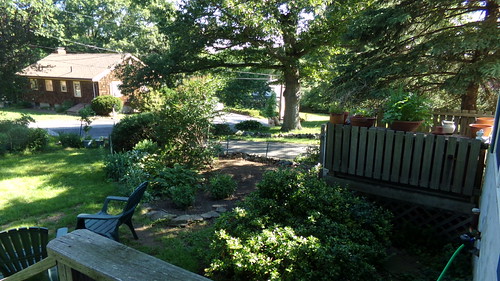 So we took out all the burning bushes AND the two large forsythia bushes… I can see down the street now!

My plan is to plant rosebushes all along that back perimeter of the corner garden, at the top of that stone wall. I’m hoping to find some low-maintenance rose bushes that will flower all summer long. I need some color out there!

That’s all for now. See you again soon!