What Day Is It? What Month Is It?

Did September really arrive and I didn’t notice? Oh wait, I must have noticed – I change my colors here to be more autumnal.

Anyway, I’d better write something just so September doesn’t get completely away from me.

This has been a busy time for me lately. If you were a bug living up on the ceiling at the junction of the wall, where a lot of those buggies live, you’d probably disagree with that statement – that I’ve been busy lately. You’d probably be saying to yourself, “Busy? Her? She just sits there in that big tank of a chair all day doing nothing!” But if you did say that, Mr. (or Mrs.) Bug, you’d be wrong!

These days it’s not my body that is busy but that gray matter between my ears. It’s working non-stop lately on so many different jobs and topics that occasionally it spins like a top and threatens to take right off into the stratosphere! So far I’ve managed to catch it and rein it back to Earth… so far…

Basically, you could call me an obsessive/compulsive personality. Once I get a bee in my bonnet, so to speak, I run with it and it’s like trying to stop a freight train out of control going down the tracks.

Speaking of trains, as an aside, I read this article in The Argus online newspaper (which services the areas of Brighton and Hove in southern England) about a train that hit a cow on the tracks. That started my day off great! How horrible for the cow! How horrible for the passengers on the train, as well! This accident disrupted a lot of other train services all around that area, as you can see if you read the article I’ve linked above. What a mess.

But back to the other stuff. It’s been a dizzying few weeks here for me. My usual mental activities which include keeping up with the Red Sox baseball (even though they are in the tank this season, I am still a fan… a faithful one), keeping up with the various golf tournaments and my new favorite athlete, Rory McIlroy (although the last two events he has not won so I’m starting to worry about him a bit), keeping up with the tennis, i.e. the U.S. Open tournament going on in New York City right now, trying to keep up on my home and family and making sure they are happy and content which mainly involves keeping them fed and cooled off in these sweltering weeks near summer’s end. All this has kept me busy – in the brain, anyway.

But the biggest thing that’s happened was when I started a new book I’d bought by Helen Forrester called “Twopence to Cross the Mersey” about her life growing up in WW2 era Liverpool, England. That one book has changed my whole life around so that Liverpool has become my constant obsession now.

Forrester wrote a 4-book-autobiography beginning with the book I mentioned above and moving on to “Liverpool Miss”, “By the Waters of Liverpool” and “Lime Street at Two.” A couple of days ago I finished up the last one of these and I’ll never be the same again. In my brain anyway. In my sentiments, my empathy, my human spirit that fuels everything I do in this Life.

Now I’ve just discovered that Twopence to Cross the Mersey is being made into a straight play and will run at the Epstein Theatre, Liverpool, from March 10-21, 2015! Wow. I say “straight” play because it had been made into a musical before this, and I just can’t see how that would work with this story of war-torn Liverpool and all the sadness and grit that went along with Forrester’s stories. Another link to the Epstein Theatre site about this play is here.

Wow. Now there would be a dream-come-true for me – to be able to fly over to Liverpool to see that play in person. It will never happen, and at this point, I think I know all the details of these books already – it’s all I think about for most of the hours of every day lately.

“Helen Forrester” is the author’s pen name. She was June Huband while a single Liverpudlian Miss and then married an Indian man and became June Bhatia. She ended up living in Edmonton, Canada, and she wrote the 4-book autobiography set as well as quite a few other novels, all taking place in the areas where she has lived, including India and over into Canada. I am working on obtaining all those books and have a few of the novels already – am about to start one today, in fact.

But enough about that. I’ve become obsessed with her story and have been reading up on Liverpool and what that city went thru in the big wars. It was horrible. I don’t know how anyone lived through that time period. “Helen” died in 2011 at the age of 92 which is a testament to her grit and resolve to survive despite unspeakable challenges.

You see? I can’t even get on to another topic?

OK… break from that…

Last night we had an incident here. You might think it was a minor incident, and in the big scheme of things, yes, it was. Compared to Helen’s life, it was miniscule and insignificant. But for me it was huge.

We lost power in the middle of the night/morning, around 2 a.m. For some reason we both were awake and noticed it right away – it was pitch black upstairs. With none of the little tiny lights that stay on our gadgets all the time, plus the night-light in the bathroom upstairs, to light the way around for humans and canines alike, it was the darkest I’ve ever experienced. No difference at all with eyes open or shut. It was scary too. The AC had, of course, stopped cooling us – the fan went off, the clock-radio was a goner, and the dogs, mainly Kip, were restless. He was walking back and forth between our two bedrooms when it dawned on me that he can’t see either and the stairs were right there… when all of a sudden…. KER-BANG! Down my boy went, crash-bang-boom down the steep stairs to the first floor flagstones by the front door. Holy Smokes, I flipped out of bed faster than I’ve done in years and rummaged around until I found my flashlight near the bed. I yelled to Paul that Kip had gone down the stairway and to go see about him while I followed with the flashlight. He seemed to be walking back and forth so at least that was a good sign.

When we got downstairs with the flashlight, he was a little freaked out and shaken up. We let them go out for a quick pee and then back in and Kip went right back up the stairs to bed. Paul got Em and joined Kip in his room and shut the door so they wouldn’t do that again! I was a wreck, just running over in my mind my little boy’s experience of falling, maybe head over heels (paws) down those hard wooden stairs… he must have been really scared! I pictured the worst but we are lucky and he seems to be OK.

I know this isn’t such a horrible happening, unlike what’s going on with some of my friends and their beloved pets right now (Peggy, I’m praying for you and Chubby Checkers right this minute!), but it did a number on me, for sure.

I stayed downstairs in my chair in the Reading Room, in front of the big double windows that were open and letting in some nice cooler night air. The man who lives across the street left in his car while all the power was off, and I think he belongs to some emergency group that jumps into service when things like this happen. I sat there in my reading chair for about another 30 minutes or so and then Bing-Bang, all the power came back and the little lights all over the house resumed their illumination of the darkness.

I have no idea yet what happened to our power. It was all over because out our windows I saw not one light anywhere. I did not hear any loud noise, either, like the sound of a transformer going down (which I’ve heard before in other instances like this). I am just now, at 10:22 a.m. going to go searching for the answer of what happened online somewhere. I’m still here with my cuppa getting caught up with my email and blogs and newspapers… and tennis from last night, etc. The day just goes by so quickly and I haven’t even opened my new Forrester book yet!

Now Kip is bugging me to let him out… sweet boy! 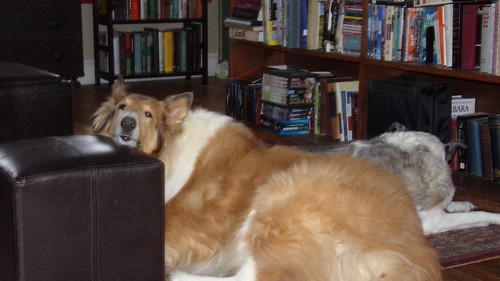 Cheers for dogs and for books and for sports and for electric power in our lives,

13 Responses to What Day Is It? What Month Is It?