This picture is what I’ve been all about this past week or two. 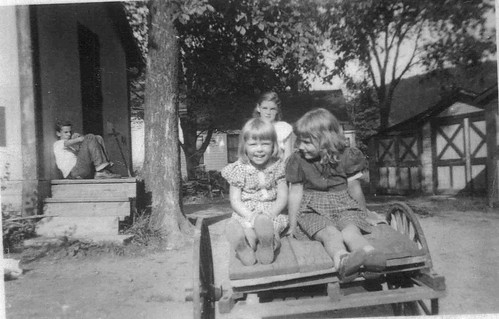 In the above photograph are my cousin Bobbie (brunette) (next to me on the cart, blonde), my (late) cousin Barbara (behind us), and some neighbor boy named Ed. This was probably taken around 1952 when I was 4 and Bobbie was also 4 but 4 months older than I. This is the only picture I have of Bobbie and me so I cherish it. I haven’t seen my cousin Bobbie since we were children. The reason I was in this picture was because my parents had bought their house in Marblehead and were moving there. My brother, being only 2, they kept with them and they shuffled me off to western Massachusetts to stay with cousin Bobbie and her family while the move took place. Once they were all settled, my family sent for me and Uncle Bob drove me across Massachusetts all the way to my new home in Marblehead.

And I remember that day but just bits of it. At the end, when we were in his big honking car and we turned into Evans Road, my new road, and he slowed way down and then stopped right in front of a shack…

It was in an overgrown lot full of debris and junk… the shack was a falling-down little house set way back from the road, and he stopped the car and looked at me and said “Well, here we are Becky! This is your new home!”

I can remember being very very unhappy and crying… I did not want to live in that haunted looking house at all! I was so upset that he finally started up the car again and kept on driving down Evans Road until we got to my real new house which was much more normal looking.

Here’s a picture of my “new” house: 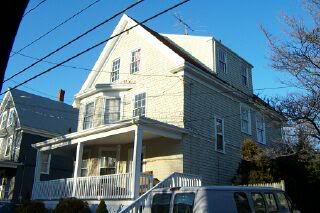 It was a big old Victorian style house with dark woodwork, only one bathroom, 3 bedrooms and 1 tiny room that ended up being a bedroom, a big old nasty dark, wet, stinky, scary basement where the “boogey man” lived in a closet there that was kept locked (until my brother and I broke into it once and only discovered lots of empty mason jars on shelves!). We had been told a lot of bull about the Boogey Man living in there just so we wouldn’t go in there. After we got in, we made it into our clubhouse!

I lived in this house from the time I was 4 until I was 19 when I finally got the heck away from it all and moved into Boston on my own. I worked in Boston at a major hospital for about a year while my then boyfriend, Bill, was in the service and went to Viet Nam, and then I got a job with the U.S. Dept. of Defense, Defense Intelligence Agency, based in Washington, D.C. I moved down there with the help of my brother and a neighbor boy who drove the U-Haul truck with all my belongings – I was 20. They dropped me off at my apartment and left with the truck the next day. I was on my own in Arlington, Virginia, with very little money and a new job to start in a week. I took home about $52 a week at that job. It was rough going.

I lived through it, got married to Bill in about a year, moved with him out to Indiana to attend Indiana University (Bill in a Ph.D. program and me working at Bloomington Hospital). After about 2 years I quit working at the hospital and enrolled full-time as a freshman at I.U. I was 25. We lasted another 6 months or so there, but the marriage was on the rocks, so I was leaving him and going back to Marblehead. He decided to drop out and come with me. We started over in Marblehead, living back on Evans Road again with my parents until we could find our own apartment.

That’s all for now on that chapter. I’ve been living here in this area ever since, back and forth between Marblehead and Salem, and finally, after divorcing Bill and then, 10 years later, marrying Paul, we bought this house in Salem and here we still are, 28+ years later. Actually, it’ll be 29 years ago in January that we moved into Crow Cottage. Our last home, hopefully. 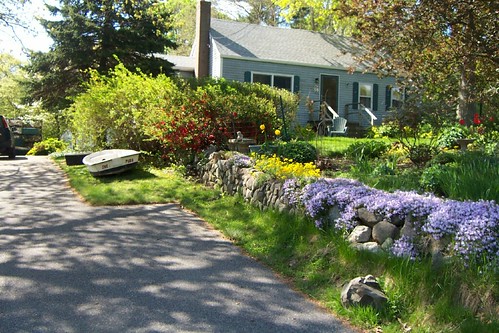 So what was the point of this entry? I forget! Oh, just that first photo of Bobbie and me. We had “found” each other online back in the 90’s but then lost touch again. She lives in Eugene, Oregon. I live in Salem, MA. We almost couldn’t be further apart geographically and still in the same country. But now we are getting acquainted again and it really feels good. At long last.

[Bobbie, I want you to know I love having you back in my life again! A couple of gray-haired old ladies… separated by many years and many Life adventures.]

I don’t know if we will ever meet up in person – but we can only hope so, somehow, one day, maybe…

14 Responses to Some Family Stuff