Are we having fun yet?

First my father-in-law died on the 4th. Then my best friend’s husband passed on, on the 13th. That’s two people close to my heart in a week. Now all of a sudden I am wondering about that third one… you know, they always say things happen in 3’s. I’m waiting now for the last shoe to drop.

Plus, with all my problems with email during this time period, I’m starting to wonder if it’s all related.

Just today Sandy and I were able to email each other the old way, with my original email addy. We sent E’s back and forth furiously, happy to be chatting again like we usually do in the mornings. It all seems to have righted itself, but I have no idea why.

Another niggling thing is that over at Nina’s blog, I can’t comment now. Somehow I got “signed out” with the comment set-up she has and no matter what I do, it will not work.

I think the World is coming to an end. I really do. I feel strange vibrations in the air.

My birdbath’s water in the front garden is now a skating rink for birds. And chipmunks. And squirrels. I am not buying a heated birdbath, although I did have one once, but it was more of a heated dog-dish that I put on the back deck for the birds to use. That was thrown away long ago. I don’t think Paul would look too kindly on me using electric power to heat the bird’s drinking and bathing water. He pays that bill each month. He doesn’t have a soft spot for the little critters of the outdoors like I have.

Then there’s the subject of the curtains. I like to have “winter” curtains and “summer” curtains, as you may know. Well, for some unknown reason, I came up short this year with no winter curtains for the breakfast room. 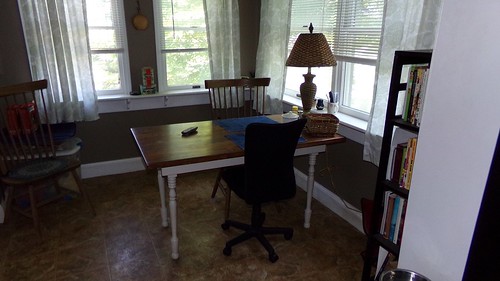 That room (above with summer curtains) gets really cold in winter. It used to be a porch room and sits down a step from the rest of the house. The back door is there and air gets under it. And we have big windows too. So usually I have some nice warm heavy curtains that we can draw each night to block out the cold air. But not this year. I don’t remember what I had there last year either. So I’ve just spent an exasperating hour putting up some old tab curtains I’ve had hanging in my closet for several years, having tired of them. I don’t really like them but they will have to do. For now. 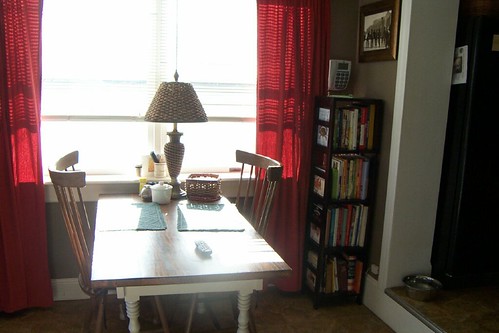 Previously I had these red ones, hmmmm, now where are those?

We’ve lucked out in the snow department so far. We’ve only had a dusting a few weeks ago. None now. Even when they told us the other night we’d wake up to 4 inches, we had nothing, only rain. Fine with me.

One good thing. Since we had a new roof installed on our house, the mice problem in under the roof and in the walls has completely disappeared.

Since I just got a new subscriber to my blog here (Hi Lois!), I thought I should at least do an entry, even though I am not really in the mood for it. I can feel a writer’s block coming on so don’t be alarmed if I disappear for days on end, or weeks…

…then again, maybe something will move in me and the spirit will be back. Or the muse… whatever it is.

Here is a picture I’ll leave you with.. remember Paul’s dad, Elmer, about whom I wrote recently when he’d passed away? 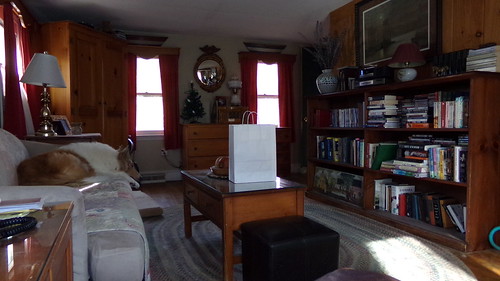 He’s back home now. In the bag there on the table, in a box inside the bag. Dad’s home.