This must be baking week for me.

Paul needed cookies the other day, so I made a batch of plain oatmeal cookies (no pictures, sorry!), and then I made us a spice cake but from a box – and it came out very good and light, with no frosting or anything on it (also no photos).

And today I found a recipe whilst reading my friend Maggie’s online journal wherein she gave a link to a quick bread recipe she had just tried, and it sounded so darn good, I had to try it for myself.

Mine just came out of the oven and is cooling on the counter now. Keeping watch is our fearless (albeit a little drooly) guard dog, Kip. 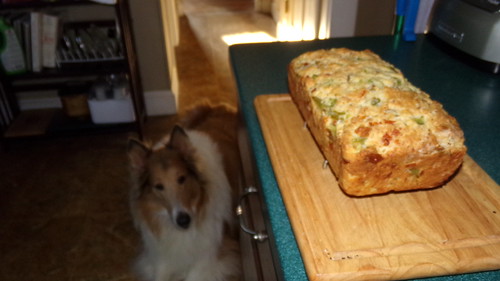 I altered the recipe (as did Maggie) from the original, so I will give MY recipe here:

In a large bowl, combine flour, sugar, baking powder, pepper & flakes, and cheeses. Toss together and make a well in the center.

In a separate bowl, combine milk, oil, and egg and whisk together. Pour mixture into flour well and stir/mix together lightly with a wooden spoon.

Add peppers and chopped olives and stir just until dry ingredients are all combined. The batter should be lumpy.

Bake for approximately 45 minutes until golden brown, or when knife/toothpick inserted in center comes out clean.

Cool in pan for 10 minutes and turn out of pan. Cool completely on a wire rack. 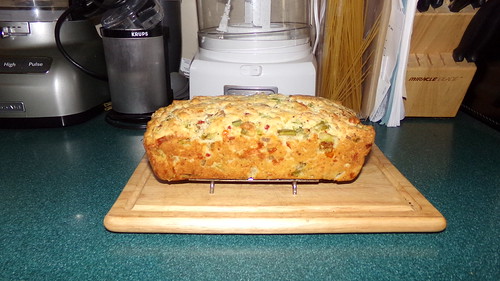 The whole house smells divine right now! If you like the heat of jalapeno peppers, go ahead and use 3 of them seeded and diced instead of the red pepper flakes. We are not jalapeno pepper people here. I also added some Parmesan cheese rather than any extra salt.

So there you have it, my version of what I am calling “Cheesy Pepper Bread.” 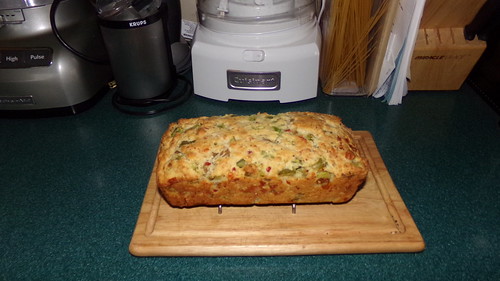 I know what will be on our supper table tonight, along with the pork spare ribs I’m planning to cook!

Again, here is the original recipe gotten from the “Home is where the Holmans Are” web site:

Thanks Maggie for introducing me to this great recipe, and Paul thanks you too… he looked quite interested in it as he passed through the kitchen just as it was coming out of the oven. I think I’ll like the addition of the green olives, too – we both love those in salads.

9 Responses to Say Cheese — as in Cheesy Pepper Bread