2) A Walk in the Yorkshire Dales (this is priceless, especially the narrator and his wonderful Yorkshire accent): (time: 20:55 but worth it!)

3) For you train enthusiasts, a driver’s-eye view of the Settle-to-Carlisle railway, non-stop, “…arguably the most scenic railway route in the United Kingdom.” (Carlisle being in southern Scotland and Settle being in the Yorkshire Dales): (time: 9:54)

In that #4 video, note at the beginning the fabulous view of ROSEBERRY TOPPING. One year Paul and I climbed that “mountain” – yes, it’s just over 1,000 feet high and can, therefore, be called a “mountain.”

We climbed a mountain – probably the only one we will ever climb. It was stunning.

And here we are, atop Roseberry Topping: 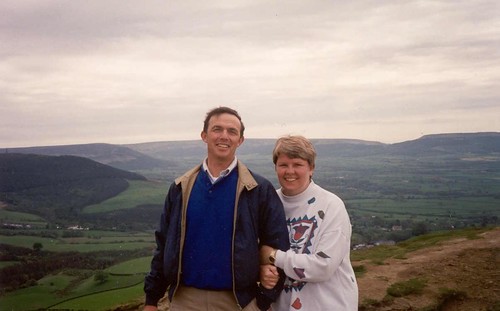 This was taken by me on the climb back down Roseberry, a real bluebell kind of day: 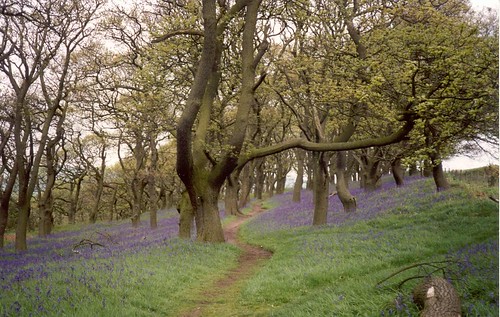 Here’s our Paul and Sandy, high atop Sutton Bank in North Yorkshire, overlooking the most wonderful place on Earth: 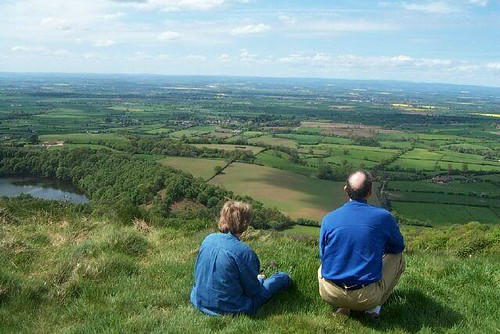 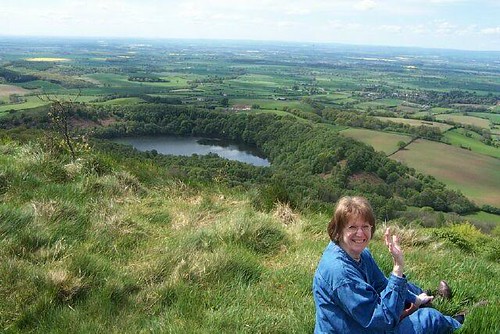 What you don’t know or see from this picture above is that Sandy, before she came to this spot with us, was severely afraid of heights, just like this… she was being very brave to sit down there by the edge of Sutton Bank and overlook all that beauty… but once she did, I guarantee you she wouldn’t have traded that moment for all the tea in China! (Right San?)

Cheers for places in the world we all would love to be,

P.S. An added bonus, (Published Oct. 3, 2012: “As it’s 28 years since the world’s fastest steam locomotive, A4 No.4468 “Mallard” returned (albeit briefly) to the main line, here is a VERY rare documentary recorded on its original and only ever transmission back on Monday 10th July 1989 which showed “Mallard” hauling railtours on the beautiful Settle and Carlisle railway over the weekend of July 16th and 17th 1988. (time: 28:30)

P.P.S. Last but not least, The History of the Settle-Carlisle Railray.

“The Settle-Carlisle line is England’s most scenic railway. This video describes its history from construction in the 1870s (with original Victorian photos) to the present day, and finishes with a scenic trip along the famous railway” – enjoy! (time: 9:19):

13 Responses to There Are Places….