Water, water everywhere, and not a drop to drink.

At 7:30 am, Paul came storming into my bedroom, where I was just having a few zzz’s after all night being awake, and he just had this horrified look on his face; I knew it was not good news.

My whole world fell thru the floor. That is one of the worst messages I could hear in the morning. It was said so many times in the past, quite a few years ago now, that I had almost thought I’d never hear it again from him.

We have about 4 feet of snow outside (see below for photos), and now we have NO WATER!

The good news, if you can call this “good news,” is that it wasn’t just at our house, it was a large water main break down the road from here, on Loring Avenue, at a big bend in the road called “Deadman’s Curve.” So the city’s contractors have been at it all day, trying to fix the pipe that broke. Usually it doesn’t take an entire day, but with all our bad weather and snow here lately, nothing is normal anymore.

Right now Paul is out on the back deck trying to remove about 3 feet (at least) of the snow that’s built up there. There is no way he’s getting up on the roof, either, so we will just have to pray it’s strong.

This water thing is unnerving for us because, for you who never heard my tale of woe, when we bought this house in late 1986, the year we were married, we did some work in it before moving in around the end of January of ’87. So no one was living here but we’d occasionally run the water when working in it. It was a fierce January that year. Very fierce. Loads of snow and very very cold temps.

One morning we came by here before work and there was no water from the taps. We were “FROZE UP!”

After many attempts to unfreeze whatever pipe might have been frozen, which took a long, long time, we had to hook a hose up to our (brand new) next door neighbors, whom we hardly knew at all, and the City provided a big black hose. It went on our front spigot and Paul had to traverse about 3-4 feet of snow over to the side of their house.

See the house on the left below: 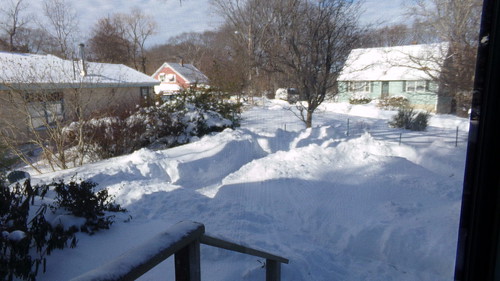 It sits down a banking from us, and he had to trudge thru all that snow down to their outside faucet and hook up to their water supply. The City didn’t charge them any water bills for all the time we had to do this, which ended up lasting into March!

So our first months here at Crow Cottage were spent without our own running water. Hooking the hose up in the morning before work, taking a really fast shower (because the darn water would actually freeze in the hose it was so darn cold outside before I would be done with a shower) and then unhooking it and pulling it all over to the other side of the house and around back and then into the basement so it could unfreeze all day until it was time to do that all over again.

At 5 we would do it again. We’d get some water going, flush all the toilets, fill the jugs of water, and then unhook it before it would freeze up. At bedtime, again we’d go through all that. It was so hard on Paul… luckily he was a lot younger then!

We ended up having to wait until March sometime when the frozen part of the pipe naturally thawed out. The other neighbors across the street who are on the same water line as we were on also got frozen up… and had to hook over to the house next to them, but it was easier than how we had to do it for some reason.

What we didn’t know then but found out another year, when we “froze up” two more times, was that our water pipes in the yard were less than the required 17 inches down from the top. Also, a water line broke out in the street at some point in time, and they had to dig up the whole street to fix it one year. Each time we had no water for long periods. Not fun.

After going thru all of this three times, finally Paul dug up the front yard and replaced our water line leading from the street into the house, which was quite lengthy.

After he replaced that water pipe, we never had another “freeze-up” again.

Then, this morning, with that lovely wake-up call from Paul, out of a deep sleep, I lost 10 years of my life in that shock. And so did he when he turned on the faucet and nothing came out!

So we are hoping it’s only a matter of hours now before we have running water again. We heard lots of air coming thru the system a bit ago, but no water yet. Maybe they are getting it put back together…

It’s definitely no fun living without running water. And anyone who has to do it for any length of time has my heartfelt sympathies!

This is what it looks like today here… the back deck that Paul is shoveling off now: 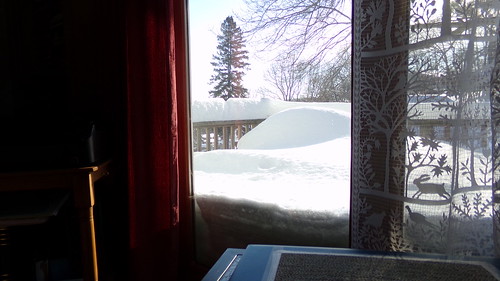 The back yard taken from the kitchen up one floor level: 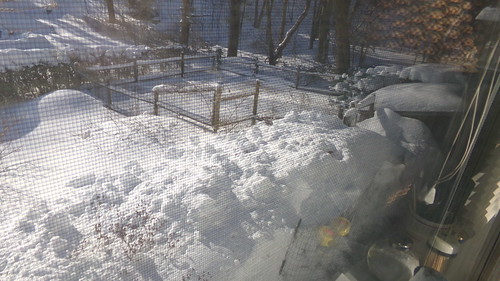 Paul earlier today, getting a path shoveled out around the side of the house: 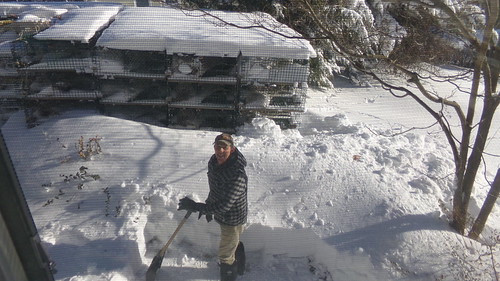 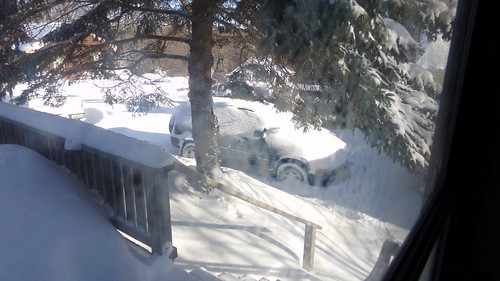 The snow on the side deck: 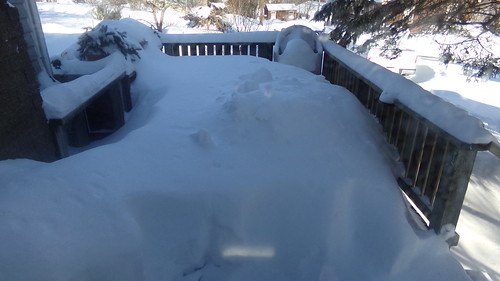 Out front – you can hardly see the dogs anymore in their paths: 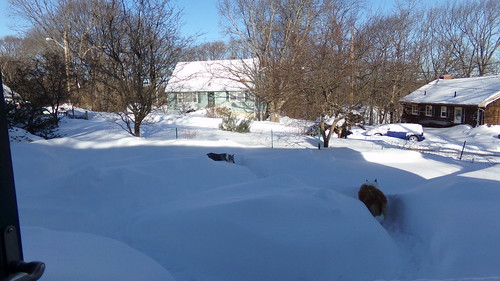 That little speck of dark color is Emmalee walking along a pathway near the fence, on the left center: 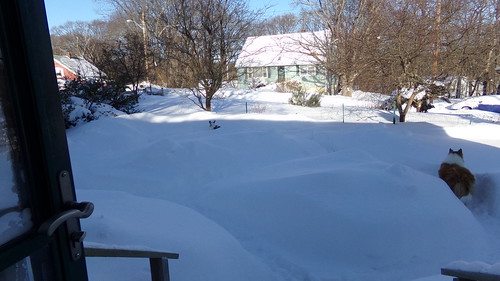 Looking down the hill: 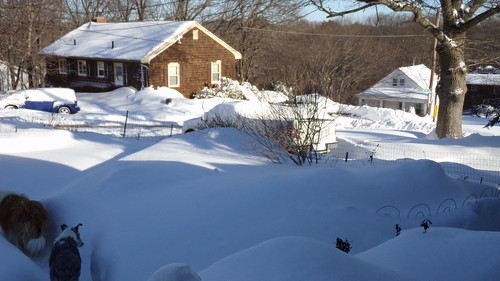 You can see our neighbor, Bob, walking his dog: 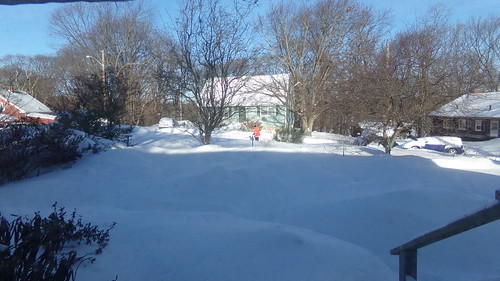 A view out the back: 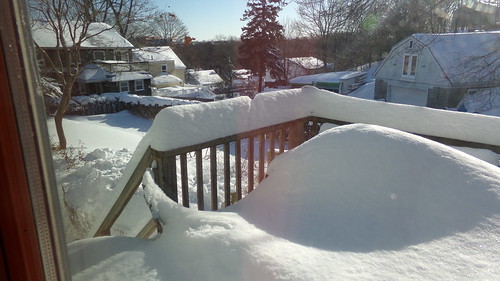 I didn’t put a ruler in the snow to measure it, but I’d guess it was close to 30 inches up from the deck: 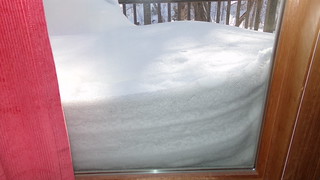 And last but not least, Kip inspecting the two new cabinets I bought for my room upstairs, that we had to assemble and which were just horrible but they will have to do, more on those another day! 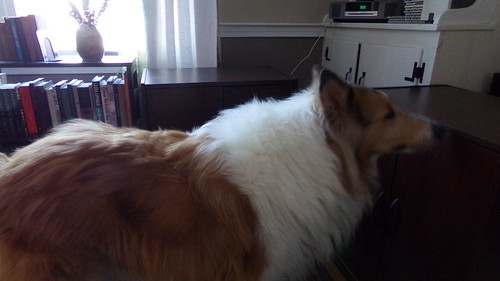 (Still no water yet)

14 Responses to Water, water everywhere, and not a drop to drink.