Well, we have the City of Salem trucks amassed outside yet again trying to find the root cause of my neighbor Peggy’s frozen pipe.

This has been the winter from hell. More for Peggy than for us, but still, we have had record amounts of snow to deal with. Just now Paul is in the process of trying to figure out a plumbing problem… one loo will flush and the upstairs loo won’t! He’s come looking for the plunger…

And the crew is down the hill digging up our road looking for the cause of the frozen pipe at Peggy’s house. They spent all day out front yesterday (see photos below): 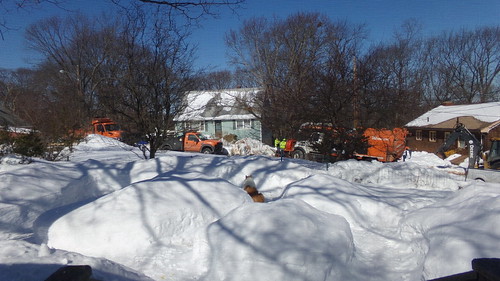 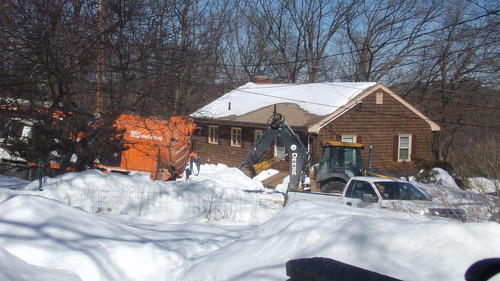 All day yesterday they were out there… nothing! They all came back today (a Saturday!) and they are now moved down the hill a bit and are digging up the road… exposing all the pipes to the cold air (so they told US to keep our taps running so THEY won’t freeze up while they have the hole open and pipes exposed).

Now Paul tells me the loo upstairs won’t empty… no matter what he does… and yet the loo down here will… so we have a problem.

The dogs don’t hate it as much as we do, because they love to eat snow, but we are fed up with it all.

That’s enough for now. We are in the midst of yet another drama here.

P.S. See “comments” for update on our loo/flushing problem. AND apparently Peggy now has her water back! They apparently put a chemical in the system last night and it did the trick and thawed out wherever the frozen section was. They have filled in the hole in the street now. Two successes in one morning… this is more excitement than my almost-67-year-old-body can stand!