I just found this page at wikibooks.org that is fabulous. If you like making different types of sandwiches, like I do, then you might want to save this in a safe place. (I know, Nina – you don’t eat sandwiches, but for those who do, this page is quite invaluable!)

My favorite sandwich of all time has to be a Reuben, or some may call it a Rachel – but it may be a combination of both.

This photo is not quite indicative of the sandwich I make, way too much meat in it! I only put one layer of each ingredient in, not 19 layers as pictured here, but it’s still just as good.

I make it with pastrami, but more traditionally corned beef is used. I have never had one with corned beef, and I’ve had a few of these in authentic Jewish deli’s and they seem to use pastrami, so that’s what I’m used to. Also in this is Swiss cheese and, of course, sauerkraut (or in other recipes, coleslaw); I like sauerkraut the best. I like Russian dressing also, or Thousand Island dressing as this is what I usually have on hand here. And then there’s the bread. A marbled rye bread is traditional, but I like most any kind of good, thick, hearty bread like dark rye, or what I’m currently using which is called “sunflower bread” and was made in my bread machine.

I finalize the sandwich by lightly buttering the outsides of the bread and toasting them in my toaster oven, flipping it over once the upper side is browned and golden. This makes for a nice melty, crunchy sandwich.

The sunflower bread is very good. I had ordered a sampling of bread mixes online and this was one of them. If anyone is interested, and has a bread machine, here is one of the grouping of bread mixes at Amazon Dot Com. Actually, I ordered two different groupings of them, and here is the other one.

So far, I’ve made the “Black Russian” bread, the “French” bread, the “Farmhouse Honey Wheat” and now am enjoying the “Prairie Sunflower” bread. All were excellent and highly recommended. They come from the Prepared Pantry company which makes many different bread mixes.

Now that I’m browsing around in that amazon page of all the different bread mixes they offer, I’m going back for a closer look.

So far I’ve only ever made a bread in my bread machine right through to the end, and the resulting loaf always comes out kind of short and compact due to the shape of the bread pan. I’ve read how you can let the machine do all the work of preparing the dough and when it’s time to just rest and then bake it off, you can remove it, put it into a bread pan of your choice, or shape it into a long thin loaf, and bake it right in the oven for the last 35 or so minutes. I keep meaning to try this technique but so far I haven’t done it. Maybe with my next bread I will.

(Here’s my breakfast/lunch for today, Monday – a half-sandwich Reuben style): 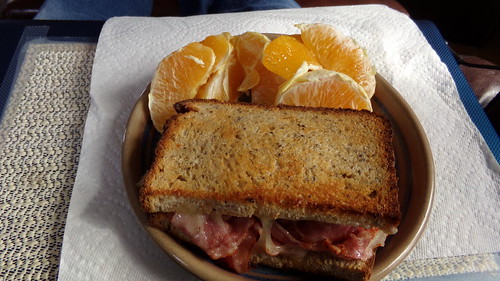 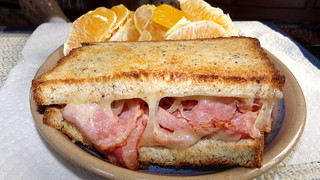 So that’s it from here. There is almost no snow left on our property, just some around the edges that is rapidly melting away! Makes me very, very happy indeed. Now if the little bulbs would start to pop thru the earth, it would be just like a real spring!