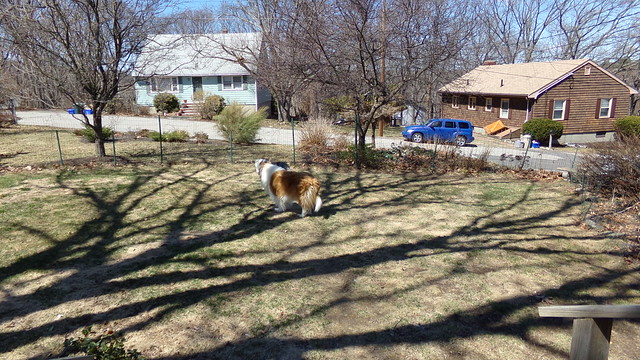 The photo above was taken on 15 April 2015. That was the day our winter ended and our spring began. The first day, since 19 January, there was no snow.

Just a few weeks before, it looked like this: 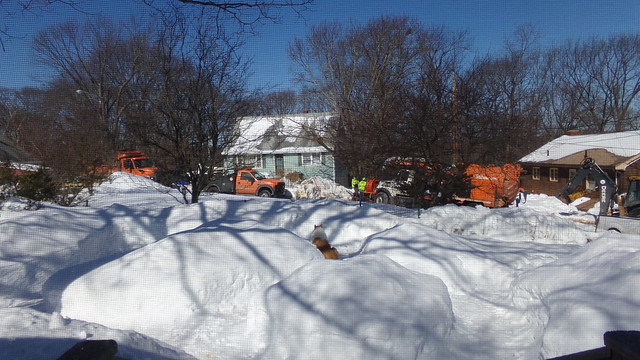 So that, as they say, is that!

2) Another corner turned is that I’ve gotten a little job accomplished that took me way longer than I’d planned or imagined. All I wanted to do was hook a plug/cable up to my laptop and into my larger screen telly in order to watch things “online” on the TV. Sounds simple, huh? Nothing is EVER simple for me.

I ordered what I believed was the correct cable from that great department store in the sky, amaz0n. It didn’t cost much at all, only a few dollars. It said it was easy, just plug one end into the laptop and the other end into the back of the TV. I did all that, and I did it correctly, but it would not work. As much as I tried, I could not figure it out. So I relented and asked my neighbor, Bob, to come in and see what I was doing wrong. He’s an unofficial computer guru of sorts, at least to me. He knows a LOT more than I ever will!

In he came, and he fiddled and diddled with things and found out that some settings in the laptop had to be adjusted and changed, and finally we got it to work: 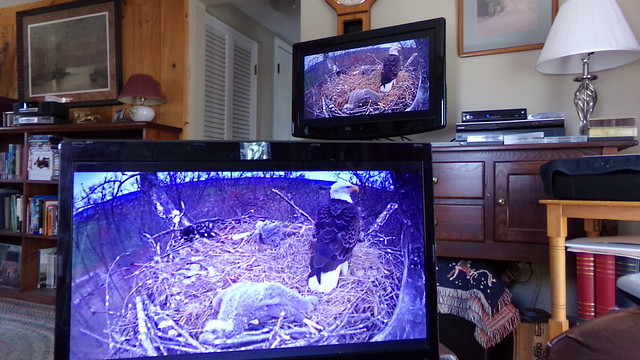 Voila. I can now watch anything online on my telly. But even better, whenever I want to show Paul something online (now remember, Paul does not “do” computers at all so I show him a lot of stuff), he can just sit on the sofa, relax, and I can put it all up on the telly. Cool.

Here we were the other day watching the Hanover, PA, Eagles’ Nest on the telly: 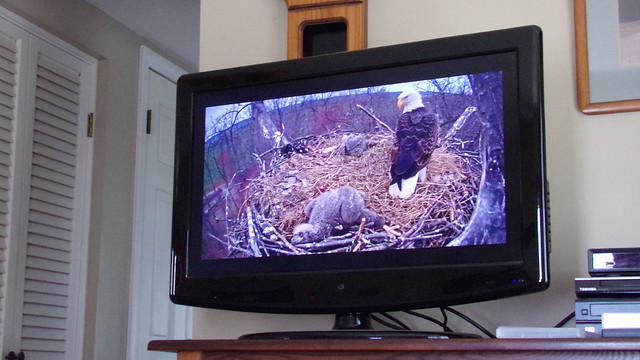 That’s basically it for corner-turning. Little things like these molehills are made into mountains in my brain until I solve them. The snow thing wasn’t my doing, in fact, long after all our snow had gone, the man in back of us had a good sized patch of snow still next to his garage, and I have no idea how it could have survived the couple of days when it almost hit 70 F degrees!

Oh, there is one more corner that has been brooched… not really “turned,” now – the Boston Red Sox are playing later today – their 11th game of the season, and so far they/we are 7 wins, 3 losses. So much better than last year! So, so, so, SO much better. But it’s a slippery slope when you don’t have great pitching, and in my opinion, our pitching is not that great. We really should have done more to boost this area of the team up over the winter. Oh well.