And the drama slowly winds down…

I was too slow. I wanted to get a photo for you of Paul wearing his new helmet, but when I asked him where it was, he told me it was “out on the boat” and that is where it is staying. It sat here for several days after his good friend Calvin brought it by, and I failed to get a photo of Paul in the helmet… sorry! So this is the next best thing. This is the exact same helmet he has now: 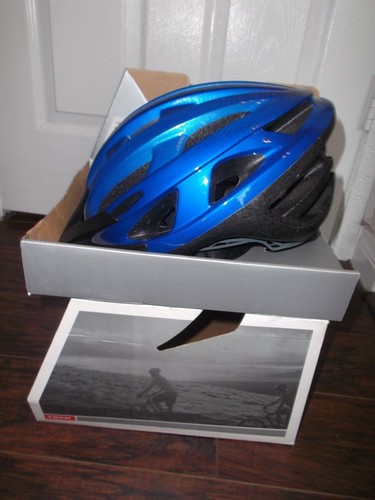 He is keeping it on the boat. I wanted him to wear it even whilst rowing OUT TO the boat, as sometimes the act of getting from the rowboat up into the lobster boat can be tricky and there is always the opportunity for a slip-and-fall during that maneuver. But he insisted he wear it only once he is IN the big boat. So that’s that. Since I don’t go out with him on the boat, no photo of him IN it.

But you get the drift.

It’s a bicycle racing helmet with lots of holes in it to vent the head with air. It goes up over his ears, too, so it’s not stiflingly hot.

And Paul is officially back to work, as of yesterday! I’m doing a happy dance!

That said, getting back to work for him has been less then smooth.

It all began last week. I came downstairs one morning and he was sitting in his chair in the Reading Room – which almost never normally happens. I was happy to see him there, but he had a clearly pained look on his face and I asked what the matter was. He then burst into tears and just fell apart emotionally. Finally I got it out of him (after imagining all the worst case scenarios!) that he was feeling like he’d let ME down! Getting this concussion and all. Our lives were so changed all of a sudden and he was feeling guilty and very sad over it all. I cuddled him and comforted him and told him that was silly… he couldn’t help it… he’s getting better every day now but it just is going to be slow rather than a speedy recovery.

So that was settled after a bit. Then, last week also he decided he’d use this non-working time to have the crew at his cousin’s boatyard pull his boat out of the water and get them to scrape the bottom and repaint it – this is a job he does himself every year around June, when the lobstering is slow, but there was no way he’d be able to do that job in his condition just now. They agreed and he was happy.

Then he ran into a family friend/lobsterman who asked him if he’d been down to see his boat lately… and what a nice job they were doing to it! Inside and out! Paul went down there and sure enough, they’d gone ahead and done some extra work that he did not ask for, and by the time he got home here, he was an emotional wreck again! He came in and sat down on the sofa and just lost it once again. He was so upset that they did that, and he just knew his cousin (who owns the business) would not bill him for all that extra work and he did not want to be “beholden” to him for it. I said just pay him extra then, but he wasn’t consoled. Oh he was upset. He is very independent and never wants to be given Anything from anybody… he pays his way and always has. Wow. Here we go again. I spent some time talking him into a calmer state.

He finally talked to his cousin and told him, calmly, that he really hadn’t wanted all that extra work to be done and that he insisted that he be given an invoice for ALL the work. Ralph agreed (I guess!), so it’s all settled.

So then, last week he had his 2nd follow-up doctor’s visit and doc told him he could go back to work on Monday (of this week) but to take it slowly.

So Monday rolls around and it was scheduled to be very hot and humid here. He got up at dawn (or before!) and drove down to Gloucester to get a load of bait (for several days’ worth of fishing) and came back and put it on board the boat. He used his helmet (what a good boy!) and he went out fishing for the first time in weeks! I’ve lost track of how many days it’s been, but it feels like forever!

He did his work slowly, he says, taking it easy for the morning until about 11 o’clock a.m. It was then that it happened… KLUNK! he got rope from a buoy caught up in his propeller! He shut the boat off right away so as not to damage it, and he sat there and tried to signal some of the other fishermen in the area to come over and give him a tow in.

No one saw him. It was mid-morning and they were all working away and he did not want to bother the Harbormaster either so he just waited there trying to flag down someone… which went on for an hour and a half! Finally, one of the Porter boys saw him and came over and he got a tow back to his mooring. He had some things to do about making arrangements to have the boat lifted out with the hauler to have the rope removed… etc… and by the time he got home here it was 4 p.m. and he was a mess, all wet and sweaty and grimy looking, and saying “What a nightmare of a day!”

So he contacted Ralph again and they agreed to lift the boat out today (Tuesday) and get the rope free of the propeller. He tried calling the regular diver, Dougie, to do it but kept getting a message that his phone was not connected. So Ralph’s guys did it, and that’s all I know of this story so far. He was gone when I got up at my usual 8 a.m. hour, and I’m hoping that all went well and that he is happily out there on the bounding main maybe eating his peanut butter and jelly sandwich right about now… and pulling up his traps.

For all that he went through yesterday, starting very early in the day (he was gone before 5 a.m.) and all the hassle he had, the concussion stuff was never even mentioned, he was more like his old self — and for that I am very grateful. I hope he doesn’t have some kind of a relapse today. It’s not quite as hot today as it was yesterday, still too hot for me but tomorrow should be nicer, cooler. He plans to sell at the Farmers’ Market this Saturday too… yay!

So that’s it to date.

I’ve got to go. The mailman is going by and I want to retrieve the mail when he leaves ours..

10 Responses to And the drama slowly winds down…