Dog Daze, or What to Feed the Dog?

I don’t know how or where to begin. 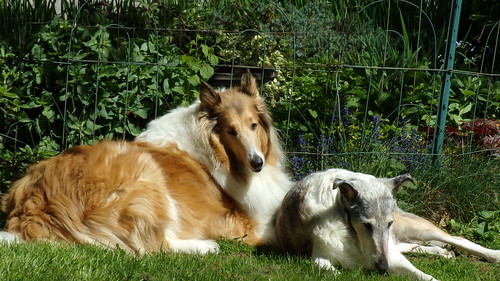 The other day was just a normal day. Except that Emmalee, our older girl-collie dog, had thrown up a pile of some disgusting ex-food and I had to clean it up. Which, for me, takes a good deal of time and planning as I cannot get down to the floor easily, or even hardly! I did that and let her out. She would not eat her supper. She had not eaten her breakfast, either, that day. Hmmm… there is a disturbing pattern here.

Kip has been eating as usual.

So, when I got down the other morning I found a note from Paul. Also I found Em’s dish of kibble in the fridge, not touched. The note said

“Em didn’t eat her breakfast, it’s in the fridge. Also, she had an “accident” in the middle of the night (vomit) so if you think she should see the vet, make an appointment for after 4 p.m. and I’ll take her down.”

I called the vet. They were super busy and put me on hold – for a half-hour! Finally, I told them the scoop and they would see her that afternoon at 5:40 p.m.

Once Paul got home from work, I got a sample each of her poop & pee and we bagged those up for him to take with him. Better to be safe than sorry.

At about 6:30 they got home. He said she has a bowel problem and is to take antibiotics for a week and go on a bland diet of cooked chicken, boiled rice, and cottage cheese.

The next day I got out a big package of boneless skinless chicken thighs and cooked them all in a baking dish, ready to be cut up for meals for her. I made a batch of rice (Oh, I need to make more! – note to self!)… and we have the cottage cheese here anyway.

She had blood drawn for the usual panel of bloodwork. The following day the vet called. I listened as he went on and on about how ill Emmalee is, or may be. Her levels were all over the map. Very high liver enzyme levels.. and other stuff… it’s all a big blur to me now, my brain is so stuffed with what’s good and what’s not good anymore.

He wanted to speak with Paul, so once Paul got home he called and finally the vet called him back. He talked to him for quite a while — well, he listened to him… and hung up. He told him all he told me. He wanted Em to have an ultrasound of her abdomen ($350.) asap, or he wanted her to go on supplemental meds – which we chose to do ($150 for 2 items). ($275 for the office visit!). As you can see, this is not a wallet-healthy endeavor.

But anyway, with the new supplements and the bland diet for one dog and not the other, and also the new schedule of Em having to eat 3 times a day and Kip his normal 2 times a day, it all got pretty complicated pretty darn fast. As it is, this is our dog schedule now:

4:30 a.m. Paul has to get up and give Em 2 giant capsules of Denamarin on her empty stomach and then WAIT 1 HOUR before he can give her her breakfast.

5:30 a.m. Breakfast for Em of chicken/rice/cottage cheese PLUS one of the antibiotic pills (metronidazole) with each meal), plus Kip has his usual breakfast then which is, of course, different.

Both dogs out and in as usual. He is off to work.

1:00 p.m. I have to give Em her second meal of all the same thing except for the big clunker capsules, those are only once a day, but she has to have another meal of the chicken/rice/cott.cheese. All the while trying to appease Kip because he’s getting nothing! I give him a milk bone biscuit, which I’ve been giving them each day forEVER.

See here for what I’ve learned… out go the boxes of Milk Bones!

Expose: What’s in those Treats?

I have to say my heart is not into cooking supper for us. I made the worst supper EVER last night… it was gross, overcooked hamburg patty and a weird coleslaw… I had to apologize to Paul for it… disgraceful. My brain is just not functioning properly.

at 8:30 or 9 p.m. Em has to have her last meal which is the trio/combo PLUS the antibiotic pill PLUS the other Supplement that is a powder and is for liver problems. This is mixed in with her food. Now this should be given 3 times a day but not at first, only once a day for 5 days for now and then increase it! She gobbles all this up quite well and I’m glad she likes it. Freshly cooked chicken, what dog wouldn’t?

Finally we go up and fall into bed in a stupor. Paul has to remember about giving her the two humongous capsules of Denamarin in the wee hours of the a.m. and he tends to forget stuff a lot these days anyway… he keeps asking me “are they chewable or not?” (“No!”) Then 5 minutes later, “Are those things chewable or not?” (“NoNoNoNo!”)

I think we both tossed and turned all night.

So the plan is to give her the supplements for a bit and see if any levels go down. Then if necessary, (which is what the VET wants, of course), get the scan of her innerds. Then I don’t know what is next.

THIS YEAR HAS TOTALLY SUCKED! Sorry, to be so blunt, but it has!

I know some of you have lost your beloved pets during this recent time period, too, and my heart just breaks and aches for you in that regard. We don’t want to lose Em… she’s 9 now and it just seems that no matter what I choose to feed them, it’s wrong!

I changed the brand of kibble today with my provider, Chewy Dot Com. The stuff I bought I’m just not sure about now (Core Wellness Chicken Kibble) – maybe Em has a chicken allergy? Anyway, I’ve changed to “Acana Ranchlands Regional Formula Grain-Free Dry Dog Food” which was rated the best by someone or other! It’s also very expensive… more than $30 more per month than my old brand, and even THAT was high! If it helps my dogs then it’s worth it.

It’s just all so complicated and disheartening when the things they advertise as being so good for your pets really are toxic to them! Just read that link I provided above about the milk bones!

If it’s not one thing around here it’s another.

13 Responses to Dog Daze, or What to Feed the Dog?