So, we make our bread with a bread machine, weekly. Paul gets his made every 4 days – using Bob’s Red Mill 10-grain Bread Mix… see below for today’s loaf. 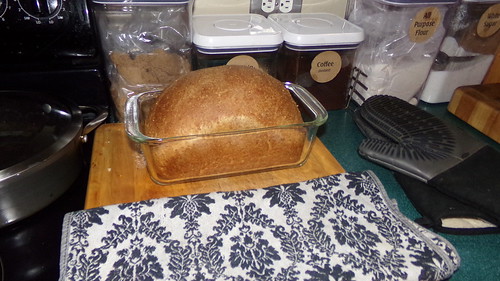 Wow, a perfect loaf. This is because I changed the procedure a bit. 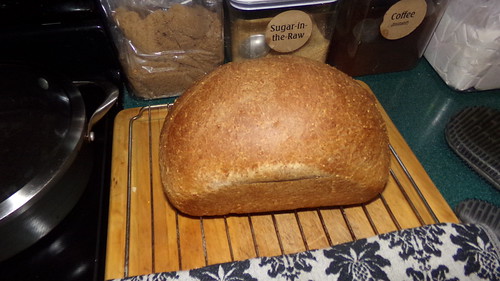 With the bread machine we use, you put in your ingredients (with the mix, we just add 3 TBSP of oil, 10 oz. of warm water, and the mix and yeast) and press “start” and it goes for 3:15 in total. During this time period, there are various “beeps” – one to indicate “now is the time to add nuts or other things” – and the next one happens with about 1:50 left on the timer and that is the time to take out the paddle in the bottom of the pan. If you don’t remove the paddle then, you will have to remove it from the baked loaf, and it will leave a hole in the bread.

So up until today, I’ve been removing the paddle when it beeps at 1:50 and then leaving it in there til it’s all baked. Even with the paddle removed, though, you still get a small hole in the bread from the post where the paddle was.

But there is another way, which I did today. When it was time to remove the paddle, I took the whole thing out, sprayed a glass bread pan with Pam, and put the dough into it, with a towel over it, for the last “rise.” I timed it so that it would sit there for about 43 more minutes and then I would heat up the oven (350 F) and pop it in for the last 45 minutes of the baking time.

It worked perfectly. The paddle was removed when the bread came out of the machine pan… and the hole where the paddle had been was pinched over with my hands using the dough. Now Paul has a regular looking loaf of 10-grain bread, and I can hardly wait to show him!

The bottom of the loaf, where there would always be a hole before: 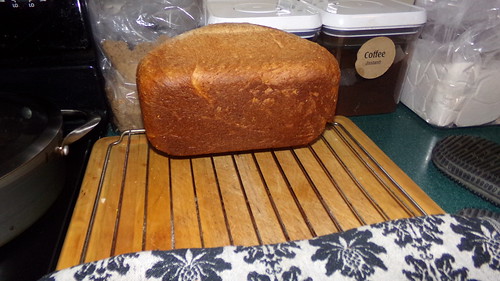 We’ve been making our bread like this for almost 30 years now. It’s taken me all this time to discover this (actually I discovered it long ago but just never DID it before now!). The little recipe booklet that comes with the (Cusinart) bread machine has a nice chart with times and temperatures for all the different recipes and types of bread, very extensive, so I just followed that for the amount of time for the final “rise” and then the final “bake.”

It takes a bit more attention to detail, but heck, I’m home all day so why not?

Here you can see a loaf Paul made… I have no idea what happened but each time he tries it, it’s less than perfect! 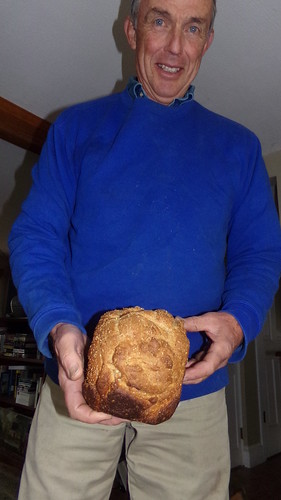 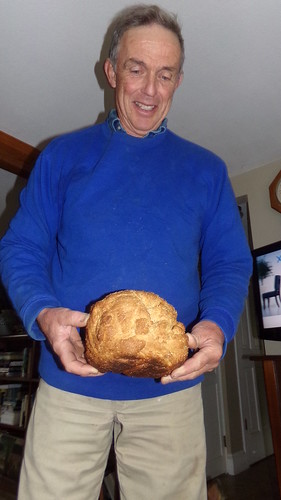 I guess it’ll be MY job for life now…

Cheers – for a house that smells like home-made bread,