A Question for Y’All…

May I impose on you for your opinion relating to television and cable companies, etc., keeping in mind we are in the USA.

We have Comcast. I am not happy with it. Mainly, it’s the exorbitant prices they are now charging. And frankly, most of the stations we are paying for (and we do NOT get premium movie channels or HBO etc. either), seem to broadcast crapola, for the most part. We spend each night after supper watching (or re-watching) our British DVDs and when they are over, it’s up to bed for us. I like to watch news during the day, some cooking shows, and PBS regularly, but I’m starting to think that something else might work just as well for these stations.

So, what do YOU use for TV reception? Cable? Which company, and are you happy with it – specifically the price they charge?

My sister-in-law just told me that they will be ditching Comcast in favor of Direct TV, so I am anxious to hear if it works for them. But in the meantime, if anyone here can share their experiences with me, I’d appreciate it.

The older we get, the more we need to think about paring down our expenses. Social Security only goes so far, and Comcast, at more than $126 per month, is getting a little rich for my wallet!

Thanking you in advance.

So far, my New Year’s resolution to “THINK” is holding up. I’m thinking of new ways to save money. Next I may think of ways to keep the furs and dust and dander down in my house… (I’ll accept any brilliant ideas on that subject, too, if you have any!). It’s never-ending here with the two collie dogs! 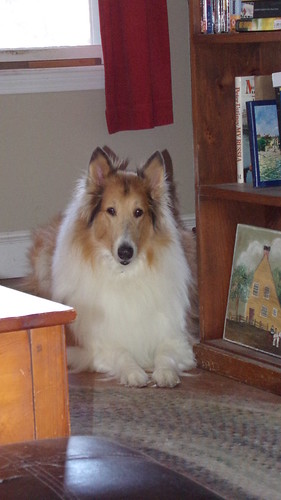 10 Responses to A Question for Y’All…