We Will Remember Him 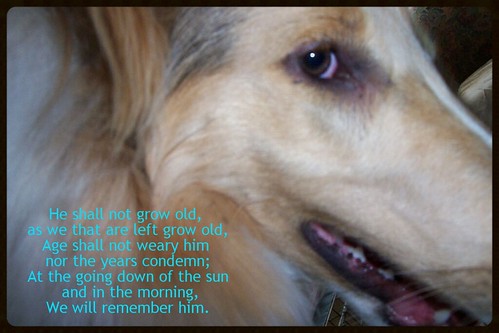 The partial poem on Kip’s photo was taken from a poem by Robert Laurence Binyon, with a couple of pronoun changes for my purposes only.

published in The (London) Times newspaper on 21st September 1914.

With proud thanksgiving, a mother for her children,

England mourns for her dead across the sea.

Flesh of her flesh they were, spirit of her spirit,

Fallen in the cause of the free.

Sings sorrow up into immortal spheres.

There is music in the midst of desolation

And a glory that shines upon our tears.

They went with songs to the battle, they were young,

Straight of limb, true of eye, steady and aglow.

They were staunch to the end against odds uncounted,

They fell with their faces to the foe.

They shall grow not old, as we that are left grow old:

Age shall not weary them, nor the years condemn.

At the going down of the sun and in the morning

We will remember them.

They mingle not with their laughing comrades again;

They sit no more at familiar tables of home;

They have no lot in our labour of the day-time;

They sleep beyond England’s foam.

But where our desires are and our hopes profound,

Felt as a well-spring that is hidden from sight,

To the innermost heart of their own land they are known

As the stars are known to the Night;

As the stars that shall be bright when we are dust,

Moving in marches upon the heavenly plain,

As the stars that are starry in the time of our darkness,

Inspiration for “For the Fallen”:

Laurence Binyon composed his best known poem while sitting on the cliff-top looking out to sea from the dramatic scenery of the north Cornish coastline. A plaque marks the location at Pentire Point, north of Polzeath. However, there is also a small plaque on the East Cliff north of Portreath, further south on the same north Cornwall coast, which also claims to be the place where the poem was written.

The poem was written in mid September 1914, a few weeks after the outbreak of the First World War. During these weeks the British Expeditionary Force had suffered casualties following its first encounter with the Imperial German Army at the Battle of Mons on 23rd August, its rearguard action during the retreat from Mons in late August and the Battle of Le Cateau on 26th August, and its participation with the French Army in holding up the Imperial German Army at the First Battle of the Marne between 5th and 9th September 1914.

Laurence said in 1939 that the four lines of the fourth stanza came to him first. These words of the fourth stanza have become especially familiar and famous, having been adopted by the Royal British Legion as an Exhortation for ceremonies of Remembrance to commemorate fallen Servicemen and women.

Laurence Binyon was too old to enlist in the military forces but he went to work for the Red Cross as a medical orderly in 1916. He lost several close friends and his brother-in-law in the war.

[The above is from http://www.greatwar.co.uk/poems/laurence-binyon-for-the-fallen.htm]

4 Responses to We Will Remember Him