This is a Podcast of a program I heard on our public radio station, WBUR, last night. What a fabulous program. It’s about 26 minutes long, and I highly recommend you play it and listen… if you can spare that many minutes out of your normally busy lives.

The song that was the subject of this Podcast was “Hallelujah” by Leonard Cohen. As you may know, this is one of my all-time favorite songs but this program presents how the song affected the lives of a few different people.

“Leonard Cohen’s ‘Hallelujah’ took him years to write. It originally had as many as 80 verses. Recorded for his Various Positions album, it was almost ignored when first released in 1984. Only Bob Dylan saw its true worth and would play it live. John Cale eventually recorded a version which was heard by an obscure musician called Jeff Buckley.

The song has been covered by hundreds of artists including Rufus Wainwright, K.D.Lang and Alexandra Burke.

We hear from those whose relationship with the song is deep and profound – singer Brandi Carlisle listened to it over and over again as a troubled teenager; it became a sound-track to James Talerico falling in love and Jim Kullander made a connexion with the song after the death of his wife.”

(All spelling above as it was published online.)

(Do they really spell “connection” as “connexion” these days or am I just being picky?)

This song, Hallelujah by Leonard Cohen has been played and listened to in this house for many years now; sung by various artists including K. D. Lang, Leonard himself at various stages of his life, Jeff Buckley, and my favorite rendition of all, by Rufus Wainwright (see below).

So I just wanted to memorialize the Podcast at the top of this blog in order to save it.

Apologies for not blogging more. I’m in a funk, a grief-driven funk that I’m finding it very difficult to pull up out of. I suspect that once the warmer weather gets here and I can get outside more and soak up some sun and vitamin D, I’ll start to improve. But, sorry to report, that’s not happening yet. I still miss my Kip as much as ever and can’t even talk about him without “losing it.” Sometimes I don’t mind the breaking down and letting it all out in tears, but I am trying. Paul even went and got checked out by his doctor because this whole affair with Kip has upset his stomach quite badly… and he wanted to know if it was just nerves or something more sinister. Doctor said it’s probably the nerves and grief more than any illness, so time will have to do the healing.

All for you luvs, 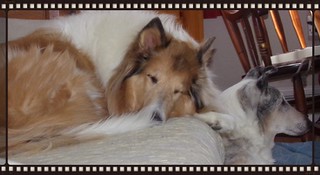