What’s In A Name?

A friend recently asked how Paul came to name his lobster boat “Bollocks!” Here you go Ed Robinson… the story behind the name.

It all started in the early 1990s. His lobster boat then was called “Sunshine.” This picture was taken by me around the time we were first married, mid to late 1980s, or so. 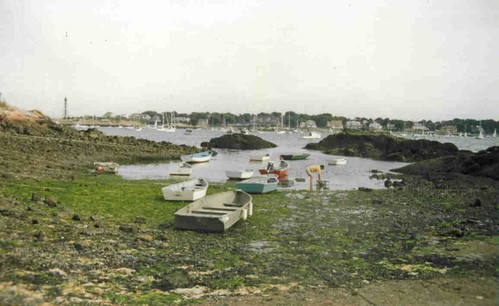 That’s Paul getting lobsters from his crate at low tide in Marblehead, MA, at Fort (Sewall) Beach. If you look closely, out in the water past the rocks, there is a white hulled lobster boat – that was his “Sunshine.” He built that boat, along with his grandfather, Ralph Crowell, who lived just across the street from this scene above. “Gump” as he was known to his grandchildren, was a boat-builder, and he and Paul built Paul’s first full-sized lobster boat together. It was a total labor of love. “Gump” was also a lobsterman, as was Paul’s dad, on a part-time basis. So lobstering has been a family affair for them.

Here’s Paul fishing out of his skiff, which preceded the Sunshine. 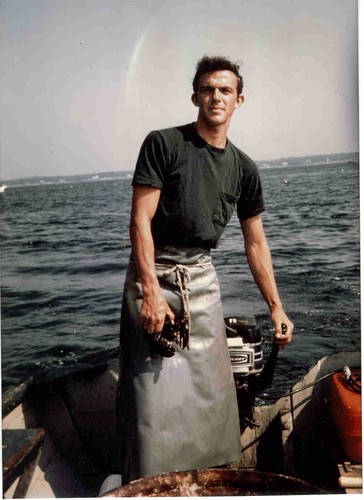 I wish I had more pictures of the Sunshine, but I don’t. Just the one above and this one below, taken on the day I first went out with Paul, before we’d started our relationship… I sat there all day (feeling a tad nauseated by the smell of the bait barrel) watching the guy I’d always loved working at his craft. 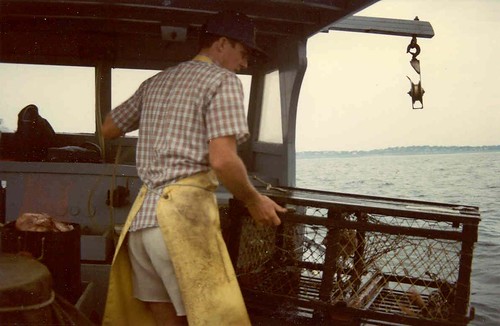 It all started for us with a storm they called the “No Name storm” It was October 1991. I got a call at work from Paul who was obviously upset and sobbing into the phone. That got my attention! What? What’s happened?

“The boat’s gone!” was all he said. Several times in a row. I said “What do you mean, the boat’s gone? Gone where?”

That’s when it all began. Paul was out of work suddenly. He spent the days after that combing the shores and beaches all around Marblehead and, yes, even over into Salem Harbor, looking for debris from the Sunshine. He found pieces of it here and there. Things that were valuable to him on that boat, like the hand-made block and tackle (seen above hanging from the wooden arm) that his Dad made for him, were at the bottom of the sea somewhere, never to be found again. All the little things a lobsterman keeps on his boat… all gone.

I asked to be excused from my job as an office manager in Swampscott, because I needed to be with Paul. We met at home here and just stood in the driveway and hugged and cried.

Then Paul organized himself and decided what needed to be done. He was out of a job. He needed a boat. Luckily, he’d paid off our mortgage on the house earlier than anticipated, so we didn’t have that hanging over us.

A new mortgage had to be taken out at the bank – boats are like buying a small house, in the end! He contacted a boat-builder down to Maine and made an appointment to go down there and order up a new lobster boat.

Well, not exactly a whole finished boat, but more of a lobster boat “kit” as they called it. It came “assembly required” which was the hard part.

Here’s a peek at the new boat before Paul began work on it (well, he had cut out two windows so far): 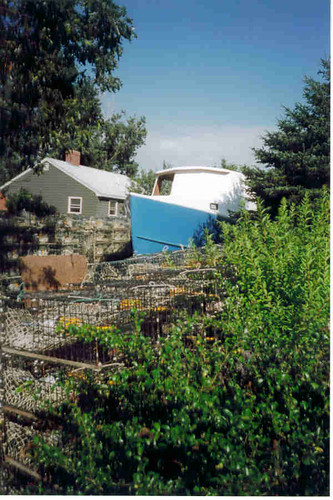 Above, you can see on the left side (where the film went wacky (this was before digital cameras), Mr. Kirk, who lived across the street, had come by to chat with Paul who basically spent the entire summer of that year out in the driveway preparing his new lobster boat for the water. As you can see, even the windows hadn’t been cut out and that was one of his many jobs he had to do on it. It also didn’t have any electrical or engine— it was just a shell. Paul had to install everything himself. It was a big challenge.

Below, you can see it finished and well-worn-in after subsequent years as a working lobster boat: 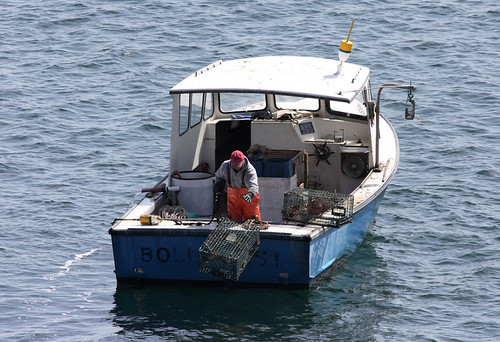 But here he was one very hot, hot, humid summer’s day, contemplating what he had to accomplish in order to go back to work: 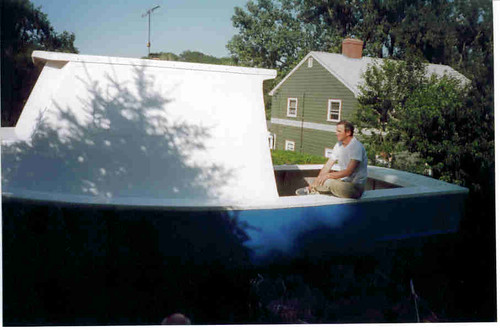 And don’t forget, he was unemployed over the whole winter while his boat was being built in Maine, and all summer while he was doing all the finishing work on it. Just about a whole year!

This has always been one of my favorite shots of Paul in his boat, taken by someone else, not sure who it was, but showing Paul and his fellow mariners… 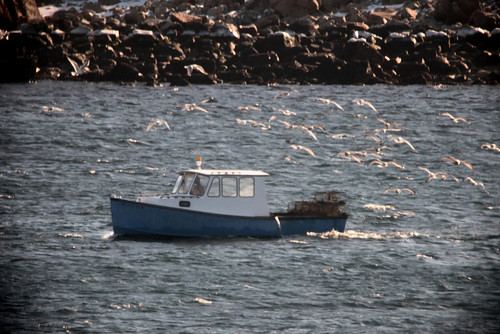 After that long hot summer (and it was a record breaker for heat, I believe, at least it FELT like it was), and Paul working every hour God gave him on that boat so he could get it into the water and get working again, by the time it was done, he was a shadow of his former self. He’d lost weight from all the physically demanding work it required, and if you know Paul, you’ll know he cannot afford to lose any weight! He was spent.

One evening as we sat at our dinner table, which overlooks the driveway where the boat sat, I said to Paul that he should start to think of a name for the boat. He did not want to name it “Sunshine” again… his “Sunshine” was at the bottom of the Atlantic ocean… not that monster sitting out in the driveway. I asked him how he really felt about this boat now? Was he happy with it? Was he relieved it was done? Was he angry that it happened? Was he sad about the “Sunshine” being gone… and he just looked at me and said,

[For anyone who doesn’t know… this is somewhat of a swear-word over in the UK. We’ve heard it used many, many times since we’ve been there quite a few times and are mainly schooled in their ways in this regard… so to people over here, it doesn’t really have the serious connotation that it does for people from the UK – like our good friends, the Wilkinsons who lived across the street from Paul’s mooring at Fort Beach. When they saw that name painted on the transom, in big bold black letters like that (and notice that the official name of his boat includes the exclamation point at the end), they were quite mortified, and they let us know they were.]

Too bad. That name said it all about how Paul felt about this boat. It was pure agony losing his beloved Sunshine, it was agony going almost a whole year with no income because of that, it was agony for him to go thru the do-it-yourself project of putting the new boat together, including the engine which was a whole ‘nuther can-o-worms. It was all agony, and “Bollocks!” just summed it all up for him, so Bollocks! it was.

This is a photo that was a mistake due to the film not advancing properly in my old camera, but I always kind of liked it anyway: 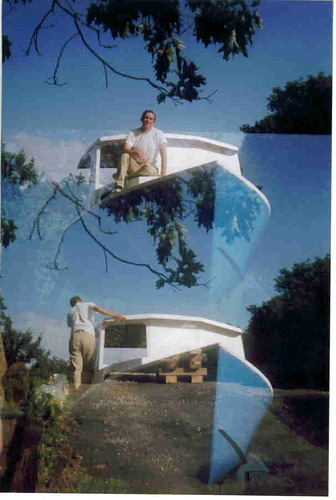 Paul and his boat.

So to Dr. Ed Robinson (who, BTW, used to be one of my “bosses” when I worked at Salem Hospital Dept. of Radiology), that is the story behind the name of Paul’s boat.

I think the funniest part of it all has been when the Harbormaster has needed to call him on the radio and you can hear him saying “Bollocks! come in Bollocks!” over the radio… just cracks us up!

The picture below was taken by Ed Robinson’s daughter recently of Bollocks! on the mooring in the harbor. That’s what got all this going in the first place! 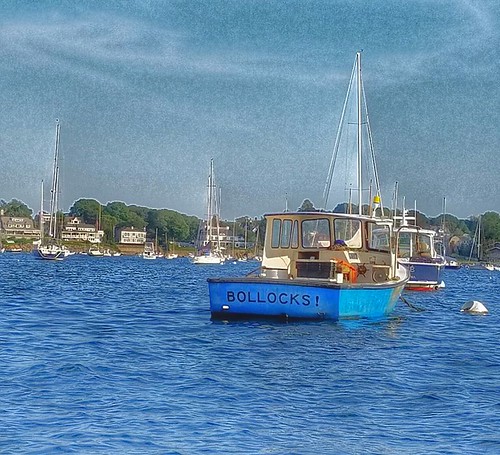 And I’ll end it with my favorite picture of Paul and his boat… this taken by a friend who lives on the water and who took several photos, using telephoto lens, of Paul while he was working one fine day. It puts it all into perspective

– man against the sea

– man working with the sea

– man and his boat 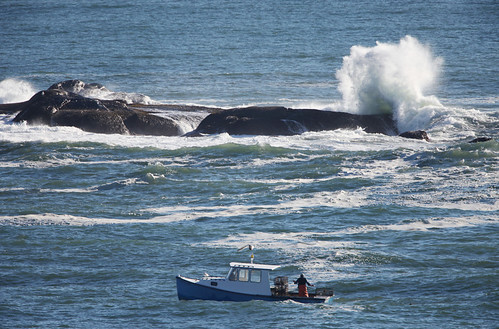 7 Responses to What’s In A Name?